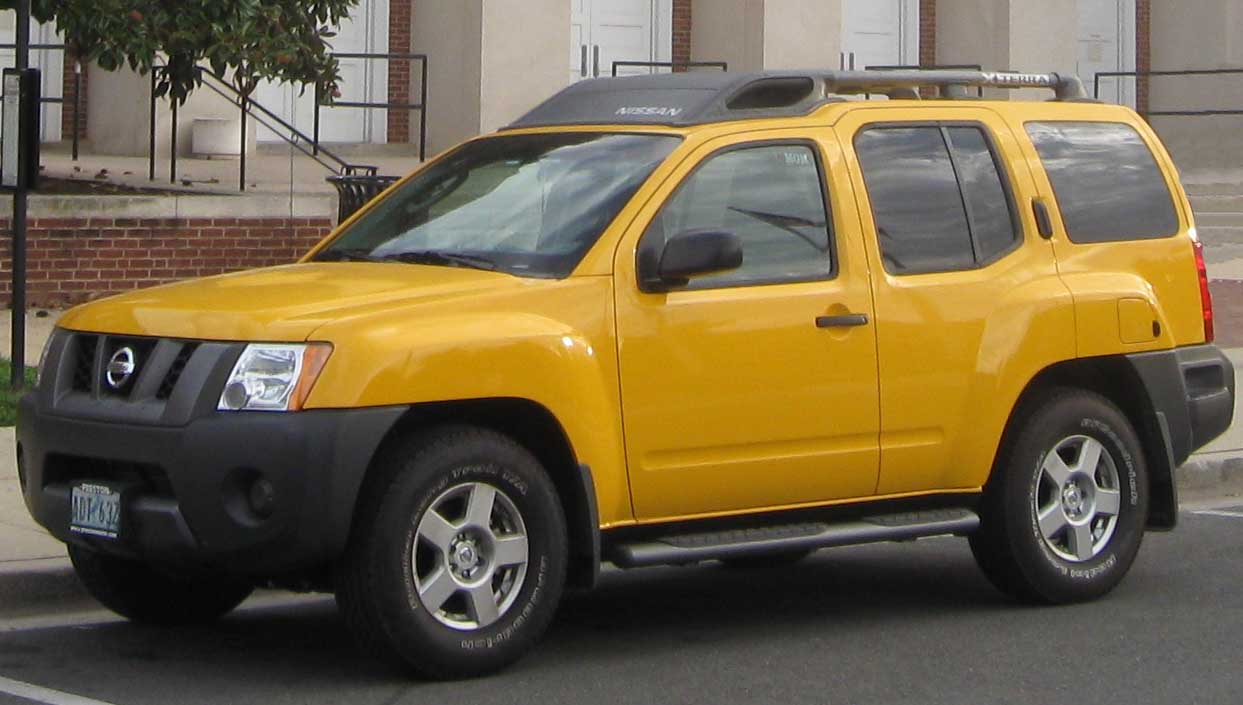 Dear man (with man-friend passenger), armed behind the wheel of a yellow Nissan Xterra, Ontario plate BJTZ–777, on Wednesday, 19 December 2012, at around 6p on Dupont Street, just west of Bathurst, headed westbound:

You broke the law. Twice over.

And this was before you began your vehicular harassment on a bicyclist, which bordered on criminal assault.

It began because you strove to intimidate a bicyclist — first, by slamming on your horn to scare her aside.

Perhaps that’s because you felt an entitlement to the right lane. You chose to demand that she clear the lane she was occupying so you could take it over. And yet, the left lane was all yours.

Maybe you thought: “Do that? For a bicyclist? What a stupid bicyclist.” You pulled up beside her a little too closely, your Xterra’s right tires rolling over the broken white lane line. You pulled down your passenger window. You were going to tell her how the world works, and your adorable sidekick was going to help enable you.

But she talked back to you. Wow. You didn’t like this one bit. Maybe you weren’t expecting it. She told you that you were aggressively disobeying provincial traffic law — section 147, to be precise.

So you upped your A-game.

You used your metal machine — all 2.02 tonnes of it (2.18 tonnes with you and your sidekick) — to try to shove her from the road, right exactly where you felt she belonged. You didn’t like that an ugly giant bag of mostly water riding her safety bicycle — together weighing about 0.0975 tonnes — was taking up right lane space instead of you.

You didn’t like it further when her knit-gloved hand made audible contact with the lacquered, painted steel of your big SUV. That’s because you’d gotten way too close to her body with your Xterra.

And then, by borrowing a page from Michael Bryant’s book, you re-imagined your SUV as a weapon.

With this weapon, you aimed a feint attack at her. You used the girth of your Xterra to try to shove her from Dupont entirely. You tried making her collide with your front-right fender as you swung your steering wheel rightward. You pointed your SUV in such a way that it was no longer parallel with the roadway.

Your fabulously sunshine-yellow Xterra was aimed for the curb to try to wedge her in between. Maybe you wanted her to slam into your fender so you could claim she maliciously damaged your ride. She was about as interested in such an impact as having to deal with your hot head.

She kept putting out her hand in defence against a far more massive object. She wanted you to just go away, for you to get back to the left lane (which was all yours, still), and back to your charmed life so she could go back to riding home.

Instead, you chose to terrorize her.

You kept trying to teach her some kind of lesson with your truck. You shouted that if her hand made contact with your SUV again, you would get out and punch her in the face.

You lunged again with the Xterra.

You kept pushing her ever-rightward to try to make her obey your command, again steering your Xterra toward the curb. This time, she avoided being struck when you squeezed her onto the side walk. She quickly returned to the road and kept riding, even though she was still pushed up against it.

Maybe you were startled at how resilient she was.

So you shouted at her: “You’re a psychopath!” She knew you were doing a little bit of internalized projecting. Then you scolded her. You shoved her from the lane she occupied so you could force her from the road. In your words to her, you were only “doing a favour, buddy!”

Then she called a spade a spade: “No, you’re a sociopath!”

You dismissed the accusation hastily. You spoke to her like she was eight — just like the dumb girl she must have been to be riding a bicycle instead of driving an option-laden SUV like the one you steered.

So you said: “You don’t even know what a sociopath is!” How could she? She’s a stupid bicyclist, right?

Incredulously, she shouted back at you, again: “You’re a sociopath like Michael Bryant when you use your car to try killing a cyclist!”

You thought this was har-har-funny. You even mock-laughed. “Yeah, yeah, Michael Bryant, whatever,” you demurred.

By now, you’d arrived to the Loblaws traffic light. So you laid down on your accelerator and — at long last — left her alone. By this point, you knew you’d overstepped a fine line into borderline criminality and even assault.

She knew this about you, too. You also seemed to realize you were outmatched by someone who knew the legal situation a fair deal better than you and was probably not as dumb as you believed her to be.

Mr. Xterra driver (and sidekick), I was that bicyclist. Hello!

Your entitlement is having a market adjustment

While you might have been headed some place important, so was I. Maybe you were headed to the opera. Or an art gallery reception. Or a date. I don’t know, and I don’t really care.

I was grocery-getting. My messenger bag was full of food. I was riding home and looking forward to removing its cargo so I could make supper.

I occupied the right lane of a four-lane arterial — the left half of that right lane. Why? Because that’s provincial traffic law. This is what other two-wheeled vehicles are supposed to do: motorcycles, gas mopeds, and electric motor scooters (people sometimes call these “e-bikes“).

Guess what else, sir?

I’m a very experienced bicyclist and — surprise may it be to you — a very experienced driver, too. By taking the right lane whilst riding, I affirm and convey to other vehicles that I’m occupying that lane and that those faster vehicles may pass me to my left, giving me safe clearance as they go about their day. This is how I survive to keep riding.

“Ride. Occupy. Survive.” This is a now a maxim for Toronto’s bicyclists, and it has helped to raise over $1,100 in trust for the surviving child of another bicyclist who was crushed to death by a motorist like you.

By using a double-strobe LED tail-light, I try to make sure I deliver generous notice to my presence on the road — well before someone approaches me from behind.

And another thing, Mr. Xterra man?

If you choose to arm yourself reflexively with a steering wheel and accelerator, manning two tonnes of metal and momentum;

If you feel that harassing other people, unsolicited and unprompted, is OK;

If you feel no compunction to intimidate, threaten to strike, or even hurt people whose total mass and physical protection is far inferior to your own — in which the end you’re after might justify whatever means you take to make it happen — then you, sir, may be a sociopath (just like the remorseless, self-absorbed Michael Bryant).

Mr. Xterra, I’d have never known who you were had you not aggressively — meaning, “without provocation” — used your horn to try encroaching on my legal space and then used your truck to intimidate from the lane.

Sir, you hold no legal authority to run a cyclist out of the lane she occupies for travelling. The only authority you have is you give her at least a metre clearance as you non-aggressively pass her on her left. You also have to use your turn signal to let other vehicles know your intent to pass.

Most of all, you cannot presume to know the law when it’s clear you haven’t actually read the HTA any time recently (or even ever).

You cannot conveniently ignore the law that when you turn the key or push the start button, you’re much more than a person. You’re now enrobed in a multi-tonne metal tank with a foot-operated power plant. You are now a weapon. Using that weapon to intimidate is not only uncivil. It is also illegal, even criminal. And it’s dangerous.

And yes, in case you were wondering, I did report your aggression to the Toronto Police Service.

Consider yourself lucky: you failed to kill me.

“A driver went after me!”

Because of what you did, Mr. Xterra man, and because of some pretty powerful narratives by people I’ve listened to, like this one in five quick parts — 1 | 2 | 3 | 4 | 5 — I’ve been inspired to try out something new. Thank you for this inspiration!

I’ve launched a tumblr called A DRIVER WENT AFTER ME!

A Driver Went After Me! lets every bicyclist coming under siege of motorists to chronicle their experience. It’s where bicyclists in Toronto & the GTA can share first-person narratives and/or bike cam videos of being attacked, harassed, actively intimidated, and/or threatened by motorists in acts of aggression, road rage, and wilful contravention of the Ontario Highway Traffic Act.

Capturing behaviour like yours to video, Mr. Xterra, can be pretty powerful testimony:

As these Toronto-oriented narratives are brought together, I think they’ll begin to speak very powerfully. By so doing, we hope to collect accounts of an emerging epidemic of aggression toward multi-modal arterial mobility. This also gives cyclists a voice which will be heard.

These narratives help to irrefutably describe how escalating hazards faced by Toronto bicyclists (and elsewhere) are not the motor vehicles themselves. Rather, they’re the operators who arm themselves with those vehicles, who feel a charged entitlement to hound multi-modal travel away from Toronto. They’ve been inspired for the last little while here, but now it’s time for them to be publicly held accountable for their on-road conduct.

These narratives on A Driver Went After Me! will also be pretty powerful at City of Toronto municipal meetings on cyclist safety, police responsiveness & policy on bicyclist victimizing; and public awareness of how these kinds of motorized vehicle road rage incidents are specifically targeting bicyclists. There’s nothing more powerful than the first-person narratives (and even cycle cam video footage) to show the pattern of aggression which can escalate in the cyclist being killed.

To fellow cyclists: bookmark A Driver Went After Me! in case you ever need it. Just be sure to first report it to Toronto Police (or to your local police service).

And to Mr. Xterra driver: you’re a big man now. I’ve immortalized you and your darling SUV. May you be the pride of your buddies. Let them all give you a nice high-five for being so noble as intimidating a bicyclist with your banana-coloured bigness.

Astrid Idlewild holds an M.U.P. in urban design from McGill’s School of Urban Planning. She’s an urban affairs writer; photographer; social media organizer; former bike messenger; DenizenTO apparel designer; and Kodachrome Toronto Registry curator. Astrid (@accozzaglia) canx understand the entitlement some men have when they use toys to make themselves feel bigger. As if life is a big sand box. As if.