Part 4 of 6 in
Mnemotechny in Toronto. 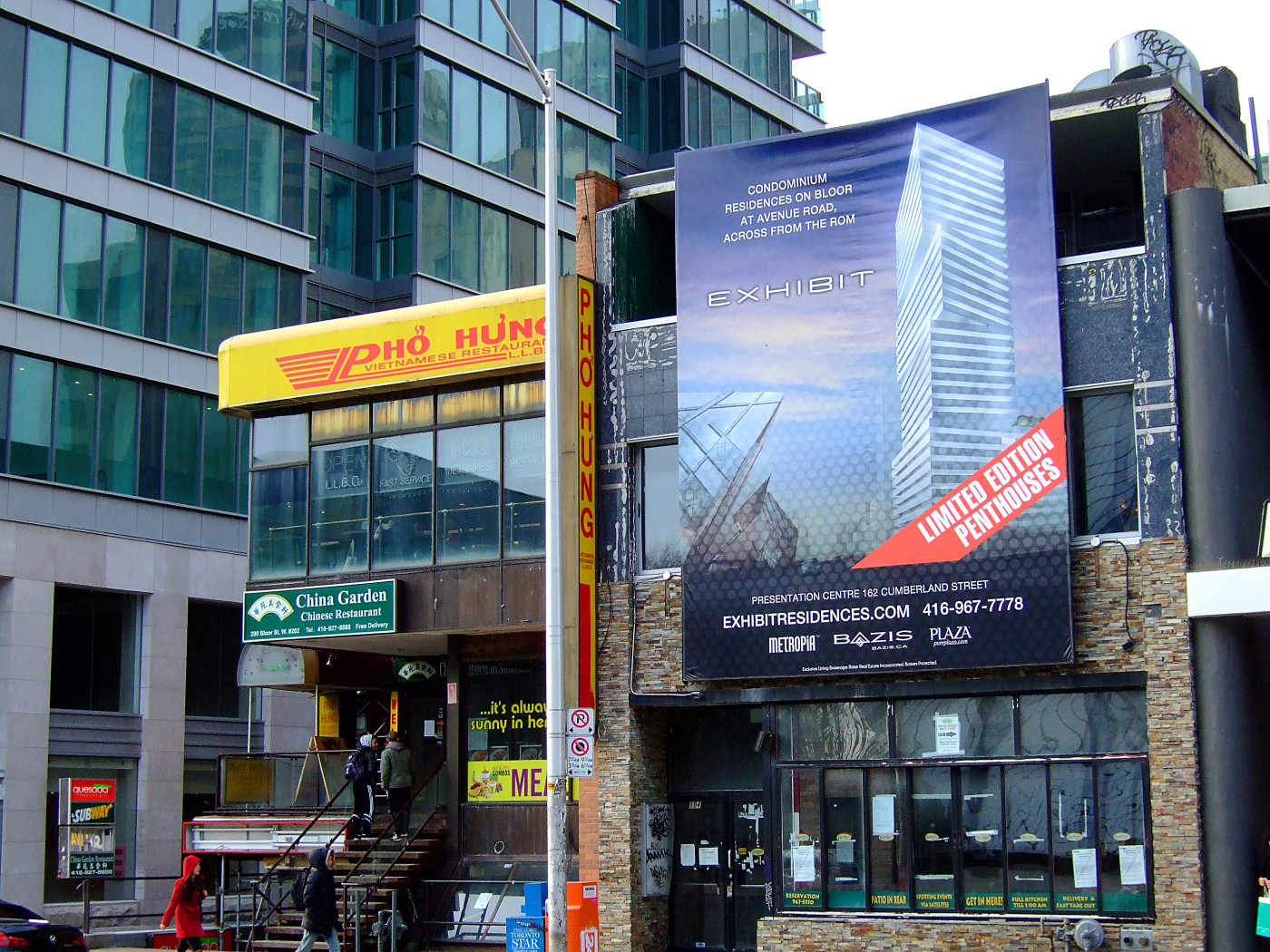 Figure 8. Beyond the glass towers of One Bedford at Bloor and Museumhouse, a third condo tower called “Exhibit” is, as of March 2012, slated for construction. It would be sited next to Museumhouse. There is no indication that this condo tower, whose features negligibly vary from its neighbours, will display its name to the streetscape once construction is complete. If so, it would render this stretch of the Bloor streetscape even more illegible, alien, and hostile to denizens and visitors. [Idlewild]

This is fourth in a six-part series, posted from June 6th to 11th, on the relationships between temporary condo names and their impact on public space wayfinding and legibility. Catch up with the previous instalment.

The dialectic between masculine real estate developers and feminine condo buyers reflects a new politics of public and private spacing within the gentrified, neoliberal city. This relationship merits examination with respect to wayfinding barriers and how the optics of condo dwellers inside an unmarked condo is producing a manufactured (and avoidable) alienation of the streetscape. It is here where the difficulty of either describing or assigning meaning to unmarked, new-build condos contributes to a wider illegibility. One’s reliance on landmarks for wayfinding, meanwhile, appears to share a gendered relationship — that is, how women and men use landmarks may reveal enough to begin interpreting how this relationship impacts perceptions of familiarity, navigability, and safety in what is becoming concentrated, but sequestered spaces for women.

Empirical research on wayfinding and navigational memory is varied. Some studies investigated ways in which women and men, as well as girls and boys, respond to negotiating space, in addition to how effectively they read their environment and deliver wayfinding directions to others. Some studies demarcate along perceived morphological sex, while others make no intersectional distinction between sex and gender. Findings suggest that intersectional relationships between gender, age, cultural background, social geography, and sites of study may impact differentially how subjects navigate effectively through space. This section reviews those differences between feminine and masculine subjects, given the gendered relationship of place-making by masculine developers for feminine consumers.

A limited, but consistent correlation exists between women turning more often to landmark legibility for wayfinding and direction-giving, and men relying more on streets, intersections, and cardinal directionals for the same. Davies and Pederson (2001) offer a caveat that peer research on urban wayfinding tends to favour study scopes which rely on grid-patterned cities as the testing site over more traditionally configured cities in Europe and Asia. Lawton (2001) factored this in her analysis, finding that women turned to building landmarks with greater frequency when providing directions to others, whereas men described using streets and directionals. Lawton’s study also evaluated differing urban grid patterns: both women and men from the U.S. Midwest and West relied on directionals with greater frequency than respondents from the South and New England who more often turned to landmarks. This corresponds, she argues, to how the former two regions were developed after the U.S. Public Land Survey (PLS) was established — in which arterials tend to follow compass directionals along perpendicular survey lines between property boundaries (ibid., 324–5).

Toronto, as with much of Ontario, was partitioned by military concession. As with the PLS, concessions and sideroads were surveyed perpendicular to one another within a particular region. Unlike the PLS, the concession baseline for Toronto (née Fort York) was Queen (née Lot) Street — whose lines ran parallel not with cardinal compass points but aligned with the Lake Ontario shoreline (Spelt 1984, 250). Shy of conducting a new study to evaluate Torontonians using Lawton’s methodology, Ontario’s concessions and Québec’s seigneurial system (both reliant on nearby water bodies for surveying baselines) may yield that resident wayfinding approaches fall somewhere between the principal regional differences revealed within the American surveys. Cultural differences endemic to a Canadian context may also reveal measurable differences in wayfinding approaches. Toronto, oriented a few degrees west of compass north, may yield different wayfinding preferences than those of someone living in Mississauga or Montréal — both configured obliquely to compass north.

Montello, et al. (2004) concluded that navigating through a university campus, by surveying routes on a map before commencing travel, varied depending on one’s gendered placement. This study supports previous findings where women tend to remember and integrate the use of map landmarks — “static object-location” — while men used experiential wayfinding (versus maps) to navigate through space. This corroborated an earlier study by Self and Golledge (1994) that women tended to perform better in spatial-relational wayfinding tasks, whereas men performed better with geometric visualizing tasks (when time, not accuracy, was a constraint). Schmitz (1997) tested girls and boys in a maze wayfinding exercise by not only gauging performance and approach, but also by how anxious each subject felt while navigating the maze. This study revealed that higher anxieties produced slower navigation. But with higher anxieties, more landmarks could be remembered, adding that “landmark knowledge precedes route knowledge and both precede survey knowledge in environmental development as well as in microgenetic environmental learning processes” (ibid., 215). Overall, girls in this study expressed more anxiety than boys (ibid., 218). On the other hand, in assessing the wayfinding skills of six- and twelve-year-old children who navigated a university campus, Cornell, et al. (1989) found no statistical difference between girls and boys within the same age group. In part, this agrees with Matthews (1987, 47), who finds that the home range — the bounds around one’s home which define a zone of comfort and familiarity — does not begin to show gendered differences until age eight, becoming markedly more pronounced after age nine. And in Doan and Higgins (2009), in a study on the wayfinding patterns of queer (i.e., non-heterosexual) subjects, conclusions were varied along disputable intersections examined by the study. The authors, however, contend that wayfinding approaches are informed by “gendered experiences of fear and anxiety,” as opposed to one’s morphological sex (ibid., 1745). This is instructive, owing to how most of the studies discussed made no distinction between one’s morphological sex and one’s articulation of gender, but rather, collapsed together these discrete intersections as selfsame.

Even with abstract spatial memory exercises, as opposed to applied wayfinding, measurable variations between women and men may exist. Reading and memory recall performance of a map by university students differed along gendered placement: men were able to read the features on a map more quickly and, subsequently, redraw its salient details with greater accuracy relative to the women in the study (Coluccia, et al. 2007). On the other hand, Ewald (2010) found that reliance on landmarks, time estimates, and arterial names in giving directions was similar between women and men. With the Coluccia study in particular, it would seem to depart from the key findings in the 2004 Montello, et al. and the 1994 Self and Golledge studies, which suggest that women were more likely to remember and integrate map landmarks.

Part five discusses the unintended consequences of ephemeral toponyms, the privatization of public spaces, and its impact on femininity, in relation to the research and arguments presented.

ACCOZZAGLIA ▸ Essays ▸ Research ▸ Urbanism ▸ A city lost to her — gendered…
Article read time
About 4 minutes
Mnemotechny in Toronto
Gatecrashing
You are not logged in.
Five-to-Midnight podcasts