Part 3 of 6 in
Mnemotechny in Toronto. 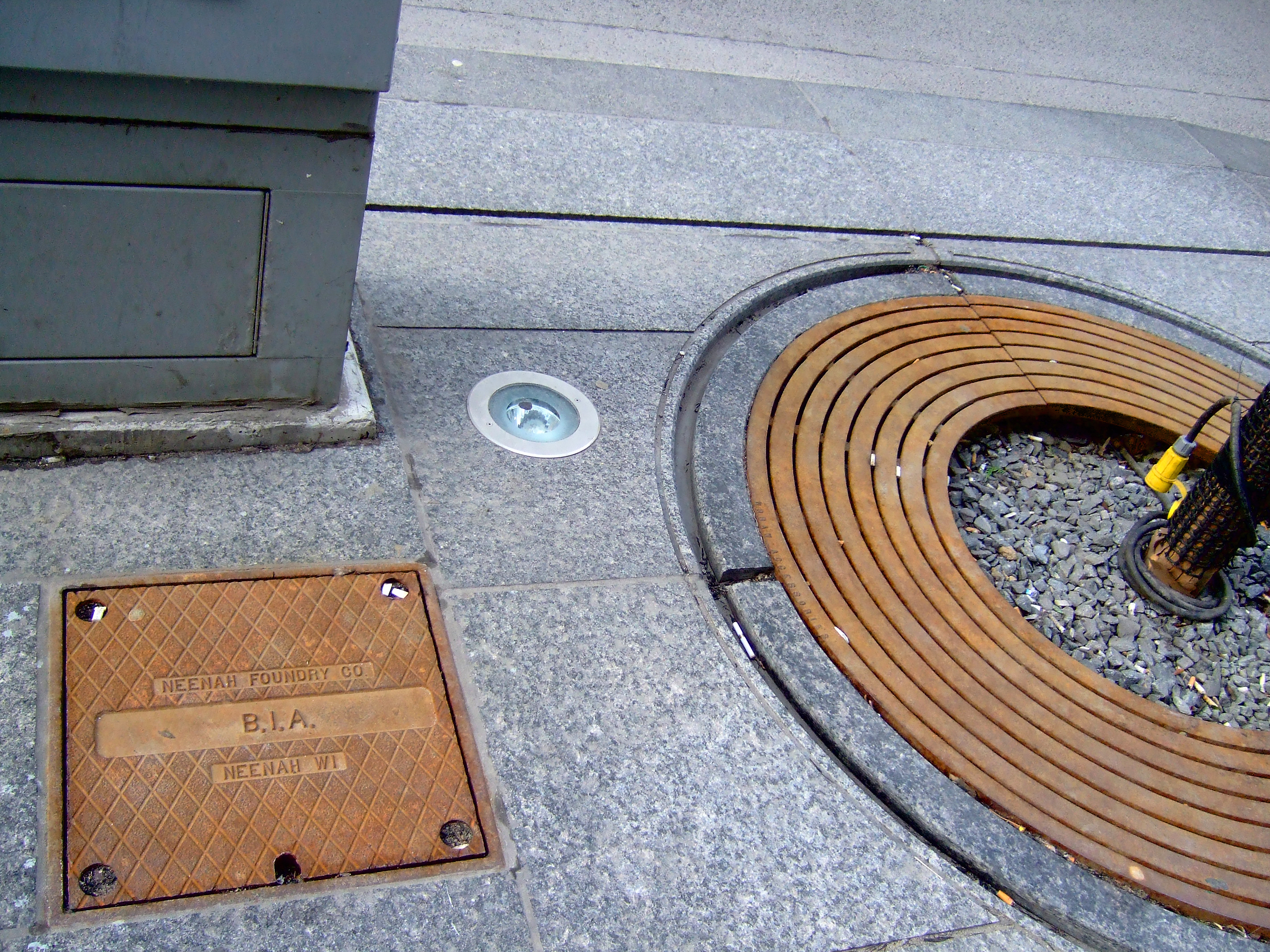 Figure 7. BIA streetscape treatments to public sidewalks within the Bloor-Yorkville BIA zone. Street furniture “props” are funded by compulsory dues received from BIA members annually — a private levy tool legalized by the province in 1970, giving rise to the Canadian BIA model. Props for public spaces in Bloor-Yorkville BIA feature granite-slabbed sidewalks, sunken pot lights for new trees, and stone “benches” engineered to minimize lounging or resting time (or accommodation for denizens with disabilities). This bench design (not shown) deprives the public realm of the means to accommodate denizens with reasonably comfortable seating; rather, the design coaxes denizens to minimize their sitting presence and seek out private sites of consumption which promise not only the illusion of public spacing (e.g., a sidewalk café), but also have cosier seating configurations. Within the Bloor-Yorkville BIA, City of Toronto street furniture is missing — including the absence of ubiquitous city bike ring posts designed to secure two bikes, replaced by BIA-approved bike lock “columns” (which have difficulty accommodating more than one bike and are incompatible with several popular bike-locking solutions). [Idlewild]

This is third in a six-part series, posted from June 6th to 11th, on the relationships between temporary condo names and their impact on public space wayfinding and legibility. Catch up with the previous instalment.

To re-populate the urban core with residential activity, condo developers rely heavily on home buyers who are women (Cordileone 2007, S3). The reasons are several, though one overarching theme lingers throughout: long known to marketers as a crucial consumer demographic, women get appraised as a highly desired resource for generating condo unit sales. Toronto’s market-rate condos are not being developed for families so much as for first-time buyers — many being professional, career-focussed women who are either single or newly married (Boyle 2005, P1; Tossell 2006, M1). The purpose of this section is to examine the reconfigured territorialities of spacing around condos; its relationship to women and femininity; and how this reconstructs a newly-divisive schism of gendered geographies within the city as the legibility of streetscapes and the elements for a healthy mnemotechny are eroded. While discourses on the processes of neoliberalism, gentrification, and globalism are extensive and certainly confront Toronto’s urban revitalization, its residential makeup, and its built form, how have these processes facilitated a gendering of illegibility for its streetscapes?

The intersection at which an in-migration of women into post-industrial urban districts; the processes of gentrification broadly; and the private securitization of public space meet, is recasting global cities like Toronto into sites where the act of choice in economic consumption (rather than spontaneous interactions and mutual exchanges with other denizens in public spaces) is lauded as the benchmark for a new, neoliberal “citizenship” (Kern 2007; Kern 2010a, 375; Kern 2010b). This paradigm informs how re-gendering both built form and streetscape is not only redirecting women toward prescribed urban spaces demarcated as “safe” (inside new condo towers where private security is both exhaustive and touted as a premium amenity), but by doing so developers are also manufacturing an optics of fear to thwart women from engaging with the public streetscape by making its terrain seem more hostile than it actually is (Kern 2010b, 211).

This occurs in three ways. First, an aggravated illegibility of the built environment alienates the urban landscape. This wards off street-level social engagement and the cultivation for a sense of place. Second, a stigma of danger gets ascribed to denizens who are confined largely to public spaces, either through social marginalization or forced non-participation from the neoliberal veneration of consumption (Ruppert 2006, 281–2). And third, an exaggeration of the dichotomy for “safety” is manufactured by repositioning ultra-securitized, new-build condos as baselines for “safety”, relegating all else as “unsafe”, if not less safe.

In Toronto as with other global cities, it is generally less expensive for first-time buyers to purchase a new condo unit than to buy a house or duplex unit. A benefit of condo ownership is that there is lower owner upkeep as property management companies, subsidized by fees paid annually by unit owners, handles much of the condo’s maintenance, security, and facility concerns (Kern 2007, 670). In addition, many women who buy new-build condo units have prioritized safety as a key selling feature (Cordileone 2007, S3; Greer 2007, R1) in response to a “fear paradox”: that is, whereas men (and articulations of masculinity) experience statistically more frequent incidences of violence from strangers within public spaces than do women, and whereas women (and articulations of femininity) experience significantly greater incidences of violence by people they already know within private spaces (typically in domestic settings) than do men, women are nevertheless conditioned by developers to believe they are subject to lower protection from violence within public spaces than inside a private dwelling (Kern 2005, 361; Koskela 1997, 303–4).

What this fear paradox has reaped is an emphasis on the securitization of not only the condo building itself, but also the securitization of public spaces surrounding condo properties — namely by creating compulsory, privately governed, levy-based Business Improvement Areas (BIAs) into which condo property management companies and storefront businesses contribute (Low 2006, 82; Ruppert 2006, 284). BIAs are integral to this process of eroding the entente between private property and the public realm through acts of ambiguous spatialization which occur even as the organic processes of gentrification are already underway. BIAs are not the drivers for gentrification; rather, they operate as privatized containments for it. As public spaces become securitized, maintained, and appointed by BIA-funded street furniture (or props) [Figure 7], public spaces emerge less as a clear commons for spontaneous social transactions between denizens and more as an encroachment by private interests to impose a medium of commodity over public realms for the function of “accumulation”. That is: to inflate the exchange value of real estate at the cost of depriving the public commons of its use value, surviving public spaces get converted incrementally by BIA encroachment into “pseudo-private” zones of consumption (Mitchell and Staeheli 2006, 153). This dovetails with the preoccupations of real estate investors and developers which scout for properties they hope to (re-)develop.

This securitization is a neoliberal colonization over the public commons: the appropriation of public space for private and pseudo-private ends (constituting both what can be used within it and what can be seen from it) strips it of its legibility as a medium for public engagement, social interaction, and cultural exchange. In this sanitizing of public space, BIAs blur what Jacobs argues is the need for a “clear demarcation between what is public space and what is private space” (1961, 35), by removing the “equality, diversity, and multiple publics and spheres… for egalitarian, multi-cultural societies” (Ruppert 2006, 274). For people who can afford their own condo unit, they may not want any eye, verbal, or proximal contact with the capriciousness, plurality, and heterogeneity of the streetscape, where everyone is on display (Carmona, et al. 2010, 213). Thus, they may avoid using the sidewalk were it not for the private securitization by BIAs to sanitize and homogenize who is likely to move through that once-unambiguous public armature. Another way to securitize the public realm is to chisel at the streetscape’s legibility — to strip away its venerable markers — so to discourage, inter alia, unplanned and spontaneous walks; tourist explorations; and engagement with novel commerce. To deprive what the memory needs to make sense of public space intimidates people into staying nearest to what they know (or avoiding the use of that space altogether).

Once a condo tower arrives to a proposed site, a policy of security assumes the role of constructing an impenetrable membrane to exclude everyone from the secure built form — save for the dwellers themselves who rely on a securitized blend of panoptic surveillance; an always-present security concierge; and even the use of biometrics (Kern 2007, 670). Private encroachment over surrounding public spaces, meanwhile, produces zones of consumption which run contiguously alongside these secure fortresses. The higher square footage cost of MCR condo towers along commercial arterials inhibits the wealth of possible uses to the aforementioned chain stores, restaurant franchises, and bank branches; it does not help to stimulate innovative, creative ideas which emerge where older buildings are not demolished, but rehabilitated and repurposed for new uses. If first-time condo buyers are moving into re-urbanized parts of the city with hopes that their immediate surroundings will remain vibrant and diverse, then they are likely to be disappointed within a few years as a corridor deprived of old buildings makes it “probably impossible for vigorous streets and districts to grow without them” (Jacobs 1961, 187). As the next section reveals, empirical field work on gender is yielding an important relationship between women and wayfinding.

As for economic might, Canadian women not only “influence 90 per cent of home-buying decisions” (Hanes 2010, H1), but for one-person households, single women also comprise the greatest share of condominium ownership nationally with estimates ranging between 20 to 40 per cent of Toronto’s new and used condo buying market (far more than 5 per cent for single men) (Cordileone 2002, 1; Greer 2007, R1; Prashad 2004, P1). Owing to an economic sway which women have over these new-build condo sales, a cognitive dissonance emerges from developers (who disproportionately are men or consortiums comprised mostly by men) when they promote and sell heavily securitized citadels for single women to call their home, but then forgo the display of permanent toponymies so to worsen the illegibility of public spaces; to eliminate a healthy mnemotechny; and to manufacture a superfluous anxiety for those women (and even men) who hesitate at the notion of stepping beyond their citadel to engage with an increasingly alien, unmarked public realm.

Part four reviews empirical research on wayfinding habits and how the production of illegible streetscapes gives rise to a securitized containment of women from the public realm.