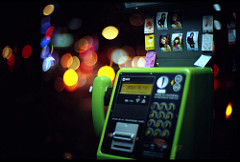 This is pulled from a pool of favourite shots I found on Flickr.

In so many senses this shot embodies the very elements I try to capture in my own night photography. Of course, it isn’t very easy to achieve something like Glitters of Night, shot by TommyOshima. In fact, it’d do me great honour to come up with something approaching this nice — particularly so the way the colours are captured without any bizarre hues from the artificial light source.

In one sense, it’s quite easy to find exceptional, even exaggerated colour at night. This isn’t the most obvious thing when everything is dimly lit by artificial lights or even a full moon, but one can capture what the eye tends to miss in one of two ways: fast film, a fast lens, or both.

In low light, our eyes tend to lose the colour information in lieu of just having crucial light information. Try this little experiment sometime: if in a room with only moonlight or a dim nightlight coming from the adjacent room, look at something which you know has a spectrum of vivid colours — say, a postcard or a quilt. While mentally you know what the colours should be, chances are you’re seeing very few of them, if any at all. Another experiment is to look at a colourful photo on the wall as you use a light dimmer to lower the light level in the room to near-darkness. As it gets darker, the colours simply turn into shades of colourless brightness (or “luminosity”). The point at which this happens is also fairly stark and noticeable.

Glitters of Night is a wonderful example of an extraordinarily fast lens: the Leica Noctilux 50mm f/1.0, designed for (big surprise here) Leica cameras. For practical purposes, there really aren’t any other lenses capable of gobbling so much light in dark settings.

The lion’s share of digital or analogue camera shutterbugging rarely uses any lens faster than about f/2.0, maybe f/1.8 (a note on the f/stop: the smaller the f — or “focal” — stop number, the more light that lens can take in, resulting in an ability to shoot quick-shutter photos in very low light, sometimes even without needing a tripod). A few might have an f/1.4 lens, but even that isn’t the most affordable lens to slap onto an SLR camera. Generally, these fast lenses tend to be made in “normal” non-telephoto ranges comparable to looking through a pair of glasses — as opposed to a magnifying glass or binoculars.

Rarer lenses like the Noctilux and the handful of f/1.2 varieties made are the kinds of lenses that photography geeks — the crazy kind (I’m raising my hand here) who like shooting at night — can be get moist just thinking about. Really. These scarce lenses tend to be as costly as a used car, or even a year of university tuition. The lens glass is often hand-made and hand-ground, as opposed to a machine or computer.

In the case of Glitters of Night, what’s amazing about the photo is that it was shot in a dim, artificially lit environment (a phone booth fluorescent) and no other source lighting. It was done so, in all probability, hand-held and without a tripod. Even more amazing is the speed of the film — ISO100 — which is typically the film speed reserved for shooting in bright daylight for most lenses. The result is a colour photo that isn’t grainy (since films designed for shooting in dark settings — so-called “fast film” — tend to have larger film grain than fine-grained daylight “slow films”).

By comparison, my “normal” lens on the Pentax 645 is f/2.8 — glacial by these standards. My little digital point-and-shoot zoom camera is even worse, ranging from f/2.8 to f/5.0!

Here’s another way to look at it: if TommyOshima’s photo of the telephone was made on ISO100 film and shot at, say, 1/8th of a second (which is the limit of hand-held shooting without needing a tripod to avoid shaking), it would be comparable to shooting the same film at 1/2 second (well actually, more like 1/3 second) with an f/2.8 lens (which would require a bulky tripod). The only way to compensate with a slower lens would be to find a faster, grainier ISO400 film. Not that there’s anything wrong with graininess (I quite love it), but the clarity and lack of grain is what sets this photo apart. And every once in a while, a night photo just looks great with a fine-grained film.

Another little bonus with a very fast lens like the Noctilux (and, in a less dramatic sense, with slower lenses) is the creation of bokeh: the odd-sounding word to describe how an unfocussed point of background light blurs into a smooth, seamless disk of light.

This is especially evident here. The presence of background bokeh is a neutral by-product of any lens focussed on a very narrow depth-of-field (in this case, just that part of the green phone — the handset — is positioned at a specific distance from the camera lens). But enthusiasts of this phenomenon classify “good bokeh” (smooth disks) from “bad bokeh” (donut-appearing rings), and they’ll rave and extol the virtues of a spendy lens creating an unreal effect (which, incidentally, can’t really be mimicked with digital manipulation, a la Photoshop). Another appealing thing about this shot is the “good bokeh”, which is generally a function of lens physics, rather than anything under the photographer’s control.