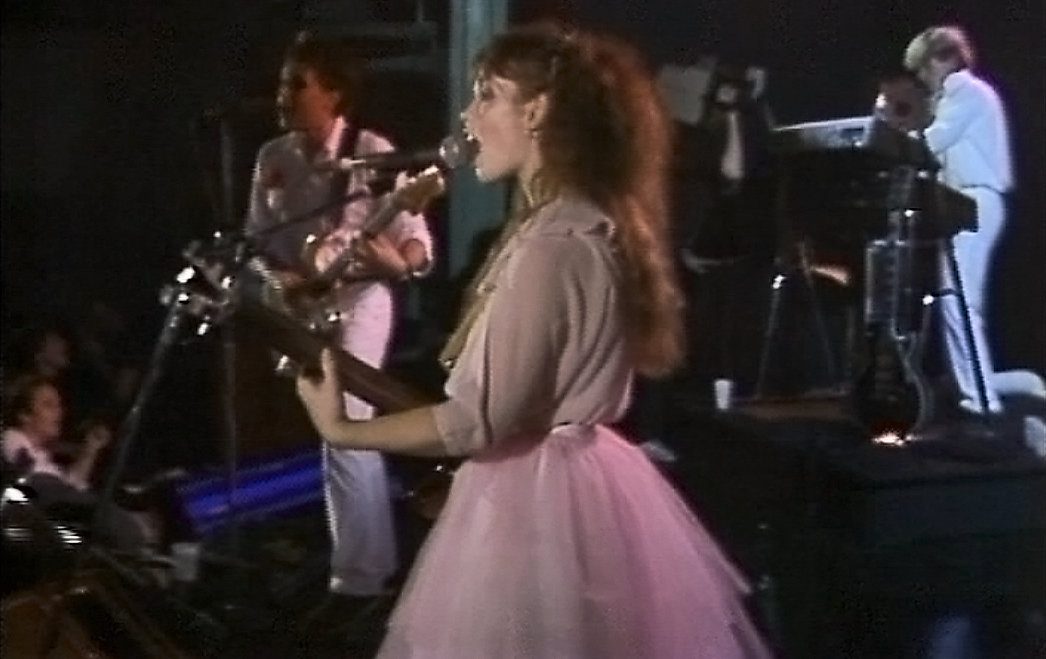 Canadian media experienced a moment of convergence during the early 1980s. The merging of broadcast radio (as a music medium) and television (as a mode of visual entertainment) embodied a paradigmatic shift in the way popular entertainment could be consumed. In Toronto particularly, the melding of two broadcast entities in 1977 — CHUM-FM and CITY-TV (later known as Citytv) — ushered the start of music-oriented television programming tailored specifically for a Canadian audience[1]. Music television shows such as The CHUM 30, CityLimits, and The New Music embraced this convergence by reaching out viewers not only within the city, but also to suburbs and small towns where a new generation of viewing consumers were considered a captive audience[2]. This audience typified what Rutherford reckoned as a “mass affluence . . . [of] money, security, leisure, and freedom sufficient to enjoy North American abundance”[3].

It should come as small surprise, then, that one particular broadcast of a live performance at Toronto’s Concert Hall by post-new wave music group The Spoons encapsulated this transitional, yet pivotally energetic moment — pivotal in that cultural entertainment was dovetailing previously exclusive mediums and creating the genesis of music-oriented visual entertainment[4]. Given how this example of commercial programming was intended for broad public consumption, this televised event signified a Canadian mass culture which further transgressed the mandate of “high culture” inculcated by the Massey Commission in 1949[5]. In this mass culture, commercial media players like Citytv founder Moses Znaimer steered the convergence of these entertainment mediums, and he also sought to challenge (albeit for sake of profit) conventions of Canadian identity by positioning women, visible minorities, and emerging musical genres in roles of authoritative visibility — positioning himself as “a deliberate nation builder in picture and sound” to challenge an English language media market widely dominated by an anglophone conservatism[6]. As The Spoons premiered nationally on Citytv, the band more than fulfilled this Citytv mandate to “offer . . . viewers a sexy, if not racy, side of Canadian content”[7]. The concert demonstrated this future of entertainment convergence in the music video programming led by Citytv and, later, MuchMusic. The Spoons’ origins are also instructive here, as the very energy Znaimer sought to tap into was performed by distinctively Canadian talent that his programming mandate was aiming for.

The Spoons were begun in 1979 in the postwar suburbs of Burlington, Ontario[8]. Founding members guitarist Gordon Deppe and bassist Sandy Horne later invited drummer Derrick Ross and keyboardist Rob Preuss to their fold — all four having attended the same high school, although staggered by a few years[9]. By the time they appeared on Citytv’s televised stage, The Spoons had released two albums for the Canadian market: Stick Figure Neighbourhood (1981) and Arias & Symphonies (1982), establishing their name earlier in spring 1982 with the radio hit single “Nova Heart”[10]. Around this time, they opened for British electronic duo Orchestral Manoeuvres in the Dark at Concert Hall in Toronto, helping to stylistically distinguish themselves from rock-oriented Canadian acts: “I don’t think Loverboy is doing anything for us. They’re opening the door for Canadian rock bands, but no other bands of our type in Canada are helping [. . .] it’s the European bands that are doing that for us,” explained Deppe[11]. This momentum — coupled with their youth (ranging from age 17 [Preuss] to 23 [Deppe]) and visibility of a female musician which, while not novel, was remarkable in that only a scant few contemporaries shared this distinction (namely, Martha + The Muffins and Rough Trade) — distinguished the band from other domestic peers while stylistically resonating with Canadian audiences, so much so that The Spoons earned a Juno nomination in 1982 for Best New Group[12]. This combination ultimately yielded an opportunity to return to Concert Hall as a headlining act to perform not only before a receptive local audience, but also before a filming crew[13].

The concert premiered in Toronto on Citytv’s The New Music on Saturday, 27 November 1982 at 10:30p; a stereo feed was simulcast on 104 CHUM-FM to complement the televised feed on aired on UHF channel 79[14]. The broadcast was later aired for select national markets (Vancouver, Calgary and St. John’s), exposing The Spoons (affordably) on a network “geared to a heterogeneous audience of the young and the restless and the urban (if not urbane)”[15]. It featured the executive production handiwork of Citytv’s Znaimer, whose involvement with his network’s productions — “from switchboard to control booth . . . to colors on the set” — foreshadowed the fast-paced branding he was pioneering for his future ventures[16]. While The Spoons were strongly affected by their Burlington roots — their songs confronting experiences of “growing up strange in suburbia” — Znaimer capitalized on their distinctive sound and fashion-forward image by packaging their music into an easily digestible format which in turn was accessible to many suburban areas that were able to pick up either Citytv’s broadcast channel or its cable feed[17]. Znaimer recognized this as a way to bring “Canadian musicians — not only their music but their lifestyles — into the view of audiences,” and he used this model to later make his case before the CRTC to win a licence for MuchMusic, a pay-television cable network launched 1 September 1984[18]. Still, some credit for increasing Canadian music video content must be directed to the CRTC: a rider to the national music television licence required its holder to re-direct a portion of its revenue to a grant-based fund called VideoFACT, enabling Canadian musical talent to help finance the creation of promotional music videos for inclusion on networks such as MuchMusic[19].

Znaimer certainly appreciated the import of airing The Spoons’s The New Music performance in the months preceding his application for the CRTC licence; shortly after the network was launched, he reprised his executive producing role by assembling a second filmed concert for the band — this time at Montréal’s Le Spectrum — and airing it on MuchMusic in 1985[20]. By then, The New Music was not only the “most widely syndicated television show in Canada, but the emergence (and profitability) of MuchMusic later gave rise to its sibling francophone network, MusiquePlus[21].

By using televised entertainment, Moses Znaimer articulated an entrepreneurial national media voice similar to the spirit of newspapers in George Brown’s day: both applied the media as a mechanism for nation-building, “elaborat[ing] a series of mythologies of nationhood which sometimes challenged but usually justified the existing or emerging patterns of dominance in the country at large”[22]. Unlike his colonial Anglo forebears, Znaimer re-shaped this narrative of nationhood to reflect both his own lived experiences as a Canadian immigrant (his Jewish family was displaced from Tajikistan during World War II before he arrived in 1948 to a culturally diverse Montréal community) and the adoption of Trudeau’s multiculturalism[23]. The value of Canadianness is undiminished here by the alternative representations portrayed by his media empire; rather, the meanings of what is popularly Canadian shifted in what his programming presented: dynamic over staid; diversity over monoculture; and the unconventional over the traditional.

Znaimer’s melding of music and television, stressing cultural and national significance in programming content (such as The Spoons concerts), was one such experiment. What remains less clear, shy of continued research, is whether these shifts were merely reflective of the diverse atomization later prevalent in popular Canadian culture, or whether his media empire helped to inform that atomization. Nevertheless, it is clear that his taking a chance on a young, local band challenged his competitors’ hedging of conservative bets (like re-broadcasting highly popular programming from America or England). His venture of promoting Canadian talent in a novel way constructed a strong case for the continued legitimacy of national culture policy as an incubator for burgeoning domestic talent.

Edwardson, Ryan. 2008. Canadian Content: Culture and the Quest for Nationhood. Toronto: University of Toronto Press.
Edwardson investigates an exhaustive historical overview of national cultural policy in Canada and the interleaved relevance of how national cultural institutions have played an instrumental and integral role in the construction of the Canadian nation.

Fraser, Matthew. 1983. Spoons’ catchy tunes deep fans on their feet. The Globe and Mail, 26 August: E6. Toronto: Thomson Canada Limited.
Fraser reviews a recent live concert by The Spoons during their heyday in 1983 and briefly examines the band’s biography.

Groen, Rick. 1983. The man who would be king: TV prince, Moses Znaimer, has big-league ideas and hopes. The Globe and Mail, 10 December: E1. Toronto: Thomson Canada Limited.
Groen reports on Moses Znaimer and offers a brief backgrounder on his history and modus operandi in the period leading to the licence application approval for MuchMusic.

Hughes, Melinda. 1983. The Spoons. Canadian Musician, May/June, 5(3): 30–1; 41–2. St. Catharines: Norris Publications.
Hughes profiles The Spoons and provides an in-depth history of how the band arrived to their position of popularity. Gordon Deppe is interviewed for the story.

Lacey, Liam. 1982. Punter gets a kick out of record-producing. The Globe and Mail, 21 January: E1. Toronto: Thomson Canada Limited.
John Punter, British producer for The Spoons’ second album, Arias & Symphonies, is interviewed on how he came across the band and the approach he undertook to help distinguish the unique sound of the band.

Morris, Samantha Mary. 2001. Much more than music video: An examination of Canadian response to American paradigms (Masters thesis, McGill University, March 2001). Masters Abstracts International, 41–01, 0010.
Morris explore many arcs relating to the oppositional relationships between American cultural imperialism in Canadian media, and the ways in which Canadian media have responded to their cross-border juggernaut with the creation of networks like MuchMusic and MusiquePlus..

Pearson, Ian. 1985. The music men. Canadian Business, April, 58: 72–5, 119–20, 122.
This article interviews MuchMusic founders Moses Znaimer and John Martin shortly after the launch of their cable network, MuchMusic. A business-oriented story retraces the steps which brought the network to fruition from Znaimer’s humble beginnings as the founder of a low-budget television network in 1971.

Rutherford, Paul. 1978. The Making of the Canadian Media. Toronto: McGraw-Hill Ryerson.
Rutherford, Paul. 1982. A Victorian Authority: The Daily Press in Late Nineteenth-Century Canada. Toronto: University of Toronto Press.
Rutherford examines the changing role of Canadian newspapers in the late 1800s and their transformation from political party organs to agencies of social and moral conscience.

Spoons, The. 2006. The Spoons live in concert. Exec. prods. Moses Znaimer & J. Robert Wood. Prod. John Martin. Dir. Dennis A. Saunders. Toronto: Linus Entertainment/CHUM International. DVD.
The Spoons, a post-new wave band from Burlington, performed live (in Toronto and Montréal during the 1980s) and were documented by a film crew from ChumCity. Both performances were aired and later compiled for this DVD.

Toushek, Gary. 1984. Rock music and CITY go together. The Globe and Mail, 25 August: P9. Toronto: Thomson Canada Limited.
Toushek discusses the imminent arrival of the nation’s first music video channel, MuchMusic and what its role might play in the coming future of Canadian media entertainment.

Zerbisias, Antonia. 1994. Much ado: After 10 years, MuchMusic’s success has exceeded even Moses Znaimer’s wildest dreams. Toronto Star, 20 August: SW4. Toronto: Toronto Star Newspapers, Ltd.
A ten-year retrospective of MuchMusic and Moses Znaimer’s media empire, Zerbisias looks back and ahead to where the Much empire is venturing in the coming decade.