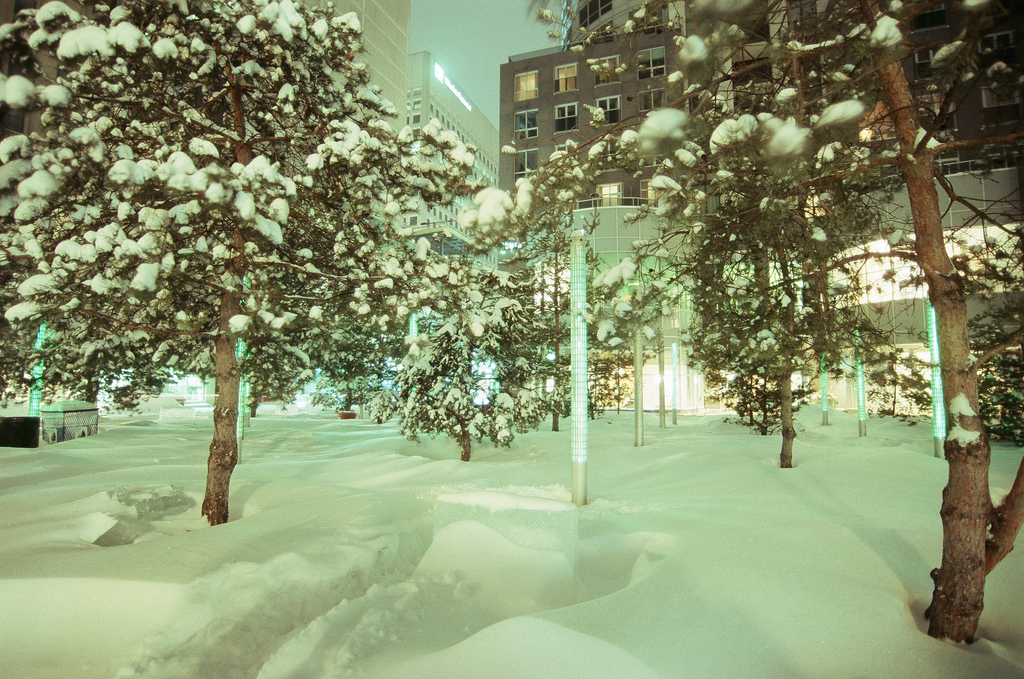 Artificial lighting at night is an emergent anthropogenic phenomenon of the last two centuries. While it may be a mainstay of most urban geographies, artificial lighting at night is still “emergent” in the sense that natural ecosystems are — on a geologic time scale — still unfamiliar with its presence, and the negative impacts of this anthropogenic activity are just now being examined.

This methods paper evaluates census data in a way which could lead to useful applications for continued research on lighting at night and its broader relationship with endocrine health. Researchers have explored cases where statistically higher incidences of breast cancer in women are being found in major cities where photopollution (aka, light pollution) is omnipresent at night and in professions whose hours extend beyond the typical daytime business shift of nine-to-five.

Could GIS data help to identify demographic “hot spots” where epidemiologists might want to direct future research on surveying health risks? Could mapping two primary data variables — classes of employment defined by the National Occupational Classification (NOC) and reflected artificial lighting at night, or urban albedo — help to distinguish a relationship between professions of women who reside in census tracts with high levels of artificial lighting at night?

This paper, which uses basic GIS mapping techniques, attempts to associate the occupations of women with the incidence of photopollution within census tracts. With methodological refinements, this approach might help isolate populations and geographies susceptible to breast cancer risk due to chronic exposure to nocturnal lighting over time. Further refinement might be able to distinguish chronic exposure to lighting at night at one’s residence from nocturnal exposure at the workplace.

Light’s relationship with nearly all life is symbiotic: it is a biological signal beacon and probably has been ever since the earliest life emerged four billion years ago (Pauley 2004, 589). How artificial lighting alters circadian rhythms, migration cycles, and other diel functions of life are now topics of interest in endocrinology, epidemiology, and zoology discourses. Likewise, economic and environmental considerations are interested in efficiency, optimization, and maximization of actual and perceived social benefits. The skyglow effect of incident or reflective outdoor lighting at night is known to astronomers as light pollution and by life scientists as either photopollution or ecological light pollution (Longcore and Rich 2004, 191). Private installations and light spillage from interior spaces excluded, more than 20 million streetlights in 2001 were actively in use across North America (Mizon 2002, 45–6). An urban ecosystems analysis approach allows urban activity to be viewed in terms which “socio-economic, cultural and bio-physical factors” can alter urban areas (Piracha & Marcotullio 2003, 2). Lighting at night could be considered one such factor. As photopollution relates to human health, peer review is finding correlative, though not definitively causal relationships between statistical increases of certain cancers in urban areas and chronic, persistent exposure to lighting at night — both indoor, outdoor, and spillage into darkened interiors (such as a bedroom).

The core of this research draws from two data sources: occupational demography data for women and quantitative data derived from photography of the city taken at orbital levels.

Quantitative data. For the former, Statistics Canada data for 2006 was used. The following datasets were selected:

These data sets were exported from the Statistics Canada database as SPSS data and opened in SPSS to generate a parsed SAV file and dBase IV DBF.

For the latter, both incidence light and reflected light, as viewed on 13 March 2003 from the International Space Station (ISS) in a digital image of the Montréal CMA [Figure 1], was used as a source for determining the average albedo of the CMA’s census subdivisions (CSD) (this image is indexed as [ISS006E37768] and is one of several in a sequence shot at about the same time using a Kodak DCS760c DSLR electronic still camera with 6-megapixel imaging sensor).

This was accomplished by the following steps:

From this, a secondary analysis of the brightest candidate CSDs were examined on a land-use basis to determine which were dominantly zoned for residential use (as opposed to, typically, industrial or institutional uses); the brightest CSD meeting this criteria was then analyzed at the census tract level to determine the albedo for each tract, while the others were discarded from further analysis. These census tract finalists formed the basis for demographic data comparisons.

These albedo values were manually added as their own column to the SPSS worksheet generated by Statistics Canada for the 14 census tracts selected for this study ­­[Figures 5 & 6]. The data set was then imported into ArcMap GIS to be represented cartographically.

This algorithm was used to identify a pair of comparably bright CSDs which, while not contiguous, are within close proximity to one another. The morphological features preventing these similar CSDs from abutting one another are a hippodrome and a major railway corridor. Otherwise, they share the relationship of being residential areas within the same vicinity. Both are in deamalgamated municipalities adjacent to Montréal (Saint-Laurent and Hampstead), and both are nearby the Décarie and Métropolitain Expressways. This will be further discussed in the research findings.

Finally, the first and second datasets — census labour data broken down by NOC category and urban albedo data — were compared in a series of maps.

Based on urban albedo values, two CSDs were identified which exceeded those of other areas within the Montréal CMA. While there may be individual census tracts with high albedo values exceeding others — the Tascherau rail yard (which is incidentally nearby the selected sites) and port lands in Maisonneuve were two such instances — these were generally not residential-rich areas.

A GIS analysis helped to identify patterns in the relationship between urban albedo and land use:

Generally, the morphology of these two selected sites present little in the way of low-albedo features with a corresponding abundance of high-albedo features. The highest urban albedo was identified in census tract 412; its value, based on the method described earlier, was 53.5 percent. This means that isolated corridors within the census tract actually exceeded this albedo — usually at the site of incident light leaking upward and along major corridors like Boulevard de la Côte-Vertu and the Métropolitain; this was offset by residential capillary streets. While the census tract/CSD of Hampstead is moderately dimmer at only 41 percent, the mean albedo for Saint-Laurent was roughly the same.

Professions within high-albedo zones. For the cluster of census tracts in Saint-Laurent, a couple of adjacent tracts in the municipality were excluded from study due to their absence of residential properties. The Saint-Laurent cluster for this study was comprised of 13 distinct census tracts, while the municipality of Hampstead includes only one tract (same as the Hampstead CSD).

The female labour force for Hampstead and St-Laurent census tract 418 was greatest, with nearly half the women employed [Figure 11]. This does not indicate a correlating unemployment rate so much as many of the women may assume domestic responsibilities of staying home to raise children. For other census tracts — 410.02 and 421.01 — the employment rate was under 34 percent, suggesting a greater prevalence of stay-at-home parenting.

Because literature correlating photopollution and breast cancer suggests exposure at the home at well as shift work, the occupational categories of interest here are those traditionally associated with shift work: category D, health occupations (physicians, nursing); category G, sales and service (retail, tertiary economies); category J, processing, manufacturing, and utilities (secondary economies); and to a lesser extent, category H, namely transportation services (public transit, freight delivery, etc.). Analysis reveals that Hampstead’s employment profile in these categories is, health care excepted, at or below average for these census tracts; it leads in management-related and arts-based occupations, and above average for social science and health care occupations. Without relying on further data, one can deduce that the women in Hampstead are, in general, well educated and possibly more affluent than women living in the other census tracts of this scope.

Management employment in the Saint-Laurent sector are very low by comparison [Figure 12]. Business, finance, and administration is divided: clusters of proportionately lower rates are grouped together, but areas where these are high are also fairly clustered [Figure 13]. With exception to edge census tract 421.01, where it is nearly absent, there is a relatively high concentration of science professions in northern Saint-Laurent [Figure 14]. Similarly, for health occupations, two census tracts in the same cluster are very high, while adjacent tracts are above average [Figure 15]. There is a hospital located at the centre of this cluster, suggesting very short origin-destinations for the women employed in that occupational category. Social sciences are high in two census tracts just west of the hospital, suggesting a similar relationship to the previous two occupation classes [Figure 16]. Arts and culture occupations are concentrated in one census tract south of the hospital in addition to the aforementioned Hampstead case [Figure 17]. Sales and service, meanwhile, is generally stronger in Saint-Laurent’s periphery (with one concentrated census tract west of the hospital), while categories where previous professions were most prevalent are fairly thin here — especially adjacent to the hospital [Figure 18]. Trades, transport, and equipment operators are virtually absent in many of these same locations, but clustered in two peripheral census tracts whose location is nearby the Autoroute 40 and Trudeau airport [Figure 19]. No woman within this survey was employed in the primary economies, which was highly predictable for a number of reasons (namely, Montréal lacks a primary economy base) [Figure 20]. Finally, processing, manufacturing, and utilities are uncommon through most of the area with exception to tract 417.02 in Saint-Laurent’s west [Figure 21].

This research illustrates where relationships between women’s professions and photopollution might be worth further study. It is interesting that many of the high employment ratios for occupation categories related to the Saint-Laurent hospital are adjacent to a major light polluting source whose operations are continuous. It would be interesting to monitor breast cancer rates for women who both work there and also live nearby — namely for census tracts 410.01, 418, and 420; while 420 is less bright, 418 and adjacent 412 (a runner-up to these main three) are some of the most photopolluted in this study scope. Also, service and secondary-economy occupations involving shift work tend to exist at the area’s periphery, suggesting that those edge census tracts exposed to greater levels of photopollution might form another basis for comparative study with other geographies.