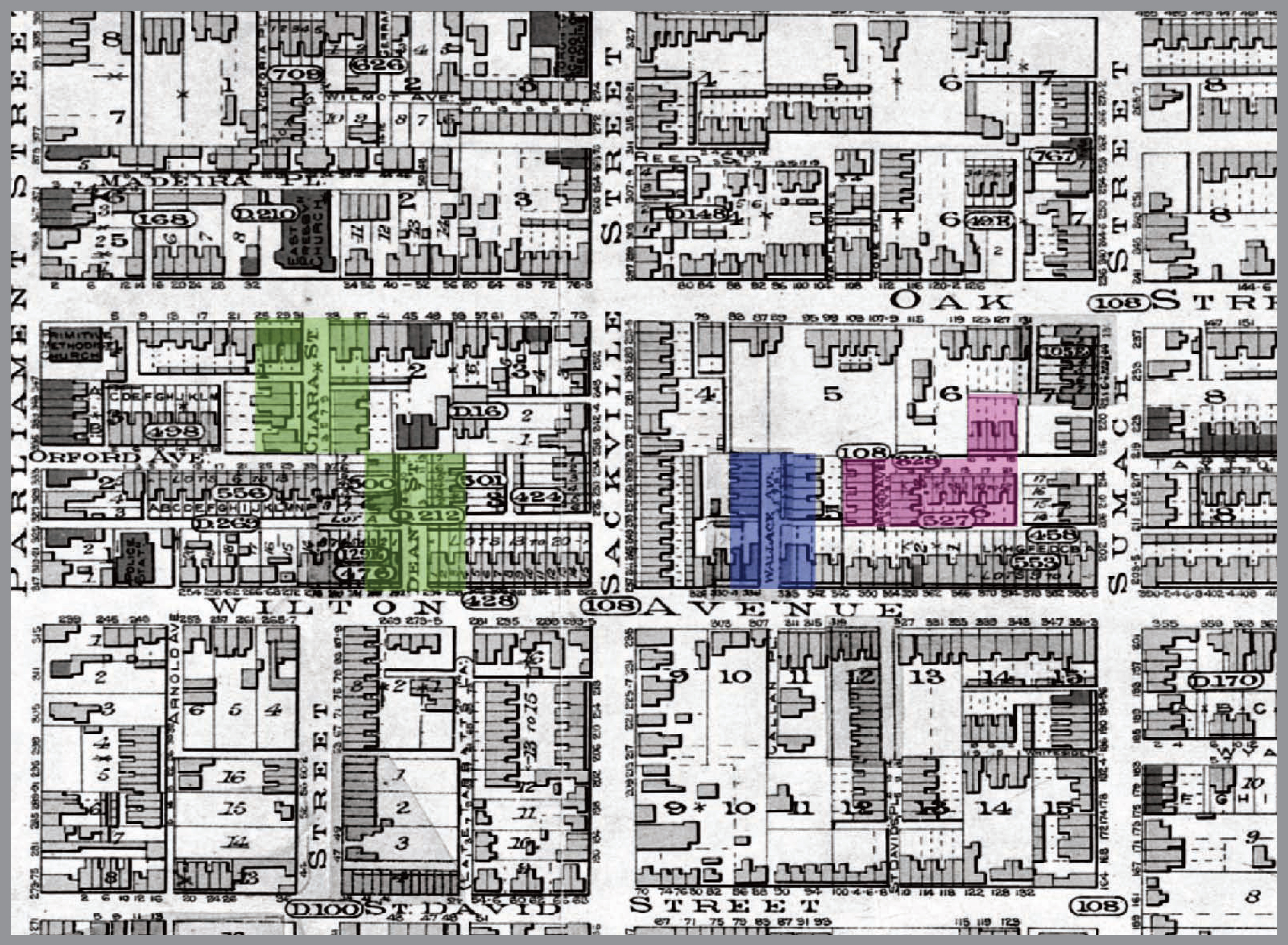 Several primary sources enable findings to be realized — some more readily than others. This overview examines five selected laneways. They were assessed as to whether each qualified as laneways, whether city building permits were issued, and what kind of structures existed on each lot. During this research, selected laneways were given greater attention over others.

Laneway candidates, all confined within scope of the Wilton-Parliament-Oak-Sumach block:

These primary authorities are being (and have been) used to assist the research:

An 1890 inventory of today’s Regent Park and Cabbagetown — St. David’s Ward and, later, Ward 2 (inclusive of Plate 28 and the southern portion of Plate 27 in Goad’s Atlas) — yielded 55 laneway street candidates. Prevalence of laneways within the scope increased as one moved south towards Queen Street. The criteria for identifying laneways was refined as follows:

Assessment rolls aided to identify several names owning properties on these laneways. The baseline year of 1890 (corresponding to the year on the map plates provided for this exercise) established a series of owners, or freeholders, possessing several contiguous properties on one or both sides of a laneway. Most of these properties were leased out. In two cases — Wallace Avenue and Briggs Street — laneways were named by these property owners under their surname. This established a benchmark when working through preceding years of assessment rolls to isolate details such as year when a privately built laneway first appeared, who owned the subdivided lots on that new laneway, and who owned that land preceding the subdivision.

Owners possessing no fewer than three laneway properties lived in any dwellings sited on these lots. They either resided elsewhere or lived nearby. The turnover rate of renting occupants in these dwellings was fairly high, although a handful of names stayed at the same addresses for years. In one case, an occupant moved from one laneway to a dwelling on another:

Of those freeholders holding no more than two lots, several were owner-occupants. It is unclear whether they developed their properties or merely purchased them from another freeholder who developed them. The next logical step was searching City of Toronto’s building permits. This, however, yielded little information: even for names like William Wallace, no permit was found for dwelling construction. It is not conclusive that these dwellings were built without city approval, but it may indicate a possibility that the city had no oversight over these laneway properties.

Occupants typically had working class backgrounds. Many were listed in construction trades (e.g., bricklayer, carpenter, plumber, painter, etc.). Given the rapid development of properties and dwellings during this period of growth, it is conceivable that some of these labourers built the very dwellings which they or their neighbours inhabited. Several women were household heads, though no profession or age was listed (reflecting their legal status as lacking many of the citizenship rights which men enjoyed). If any women held an occupation, it was not logged. Other occupations indicated a concentrated working class presence and, for some individuals, transient occupations. One notable pattern was police presence: William Wallace and others were police constables. Incidentally, a police station was located on Wilton Avenue near Parliament Street. Some occupants were also employed as “T.S.R.”; this was probably in reference to the still-nascent Toronto Street Railway.

Extra care is required to avoid confusion from changes to street address re-numberings. It was a common and recurring practice during the inception of a subdivision. For example, one house was originally 276 Wilton Avenue until 1887. In 1888, it became 280 Wilton Avenue; in 1889, it was again re-numbered to 288 Wilton. Finally, in 1890, the address was changed to 338 Wilton Avenue, and that address remained the same for the remainder of all subsequent assessment rolls. Similarly, the 346 Wilton laneway “rear” houses were originally identified as either 282/284 Wilton. When street renumbering occurred, it became necessary to identify recurring patterns of freeholder and occupant names from year to year and verify when and to what degree these occurred. Failure to consider this presented an inaccurate record of ownership changes (or lack thereof) from year to year.

As with building permits, the 1891 edition of the City of Toronto directory was used to verify information about owners and occupants for properties on one selected laneway, Wallace Avenue. The names listed closely matched the occupants on the 1891 assessment roll.

Several photographs exist in the City Archives. A significant archive of 4×5-inch black-and-white images, shot mostly during the first few decades of the twentieth century, are readily available for previewing and, in some cases, digitized for online searching. The collection referenced was a Department of Public Works fonds shot mostly between the 1920s and 1950s. These photos reveal that several dwellings were in various states of disrepair indicating a combination of poor building materials and/or limited upkeep over the half century or so following their construction. The construction also indicated fairly compact, even cramped living conditions. Based on building measurements listed in the assessment rolls, these photos corroborate small dimensions. What remains indeterminate from these photos is whether these dwellings were attached to the city sewage system.

Three sections of appendices are provided. The first section, Figures 1–6, are excerpts from Goad’s Atlas. The second section, Plates 1–26, are from the photography fonds. The third section are spreadsheet tables that were manually transcribed from city assessment rolls.

The reference data accessed to this point in the research project offers a cursory, yet insightful glimpse behind the workings of development in Toronto’s late Victorian era. The findings appear to support the idea that much of Toronto’s development then was managed by private interests without any real municipal-level planning involved, and the stakeholders in this prospective real estate market came from a variety of backgrounds. This would suggest that private development operated on a speculative private market where developing in the right place at the right time hoped to yield a high return-on-investment. It is safe to say that this was not social housing in any sense.

What could not be determined? Income levels of the land owners or their familial provenance. These could fill in a much-needed biography that otherwise cannot be gleaned from property tax assessment reports. Given how this was the first golden age of photography, it is possible — though unlikely — that public archives could yield photos of owner-developers or first occupants in these laneway houses. Original blueprints are all but likely no longer in existence. Also, city utilities could not be determined, so it remains in question whether these laneway houses were equipped with electricity or water/sewage connections. This being an era of transition toward modern amenities like these, it is possible that these were added later rather than integrated into the original floor plans. Regardless, the cramped conditions indicate that — sanitation or not — these conditions were likely challenging to those families who moved into these places, perhaps being their first urban dwelling.