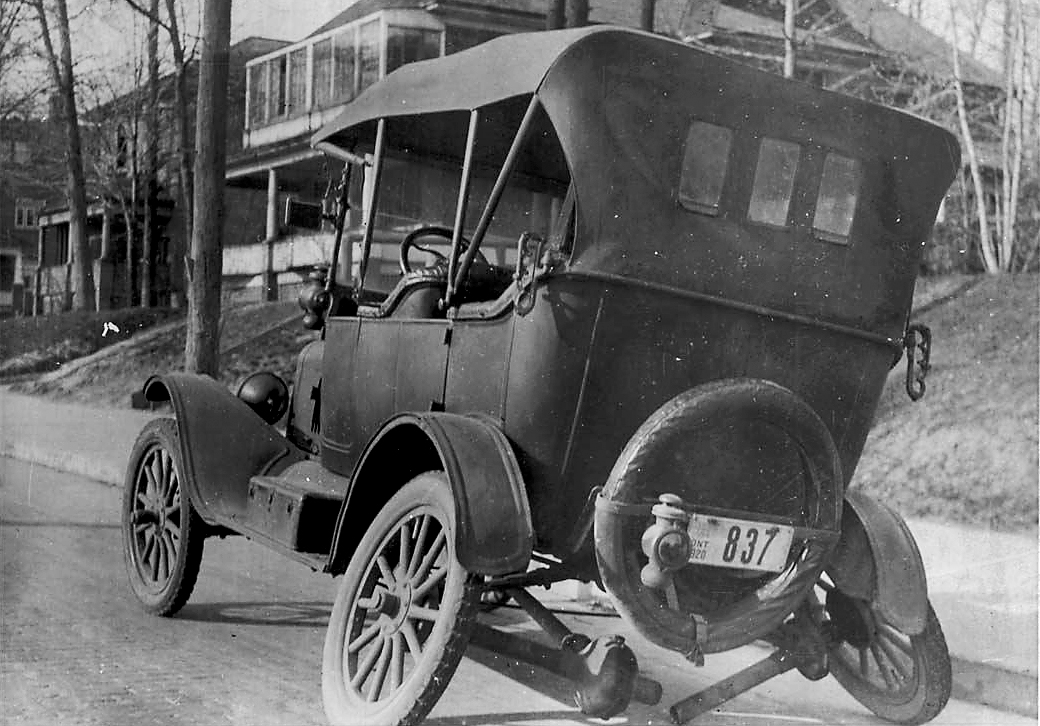 After reading this trio of essays on Henry Ford and reflecting on his company’s social impact, both with manufacturing culture and economic engineering, I now feel less inclined to concede that “it’s a man’s world; we just live in it.” Rather, it may be best to just shortcut right to, “It’s Henry Ford’s world.”

An economic paradigm of mass production which empowered factory workers to afford the lower-cost durable goods they produced — what came to be known as Fordism — was a disruptive social technology. It reverberated throughout manufacturing, and its impact was omnipresent throughout the twentieth century as the “blue-collar” worker became a household reality. Germane to this discussion, though, is how Fordism socially engineered orders of gender. Fordism reached well beyond factories, as did the strict social culture which emerged from it [Flink, 47].

As a side note, it will help to explain that I recognize relationships of gender to be articulations of a social dialect. This decouples a “language” of gender from biologically contestable notions of reproductive sex. By observing gender in this capacity (that is, less of a performativity, vis-à-vis Judith Butler, than consisting of dialects learnt unconsciously through compulsory guidance — reward/punish), one may add a subtractive filter to a pre-existing analytical lens. By understanding that one may “speak” with discrete dialects of gender, it can offer some insight as to how the several masculinities “voiced” by men in Ford’s factories challenged constructs of a universal masculinity. And yet, blue-collar culture, recognized by Henry as the backbone for his manufacturing enterprise, ultimately prized one dialect of masculinity over others from which he, as a white-collar principal who controlled means of production, was exempt.

Intersections of class, race, and physical ability indicated where, if at all, a labourer could be assigned, but a personnel-driven imperative for those men to be robust, young, and resilient — conditions which putatively helped one’s job security — cultivated a labour environment for a rationalized uniformity of masculine articulation. Unforgivingly, this articulation favoured the tough over the gentle, the coarse over the cultured and, especially, the younger over the older [Wood, 95].

Meyer described how industrial betterment meant that a push toward uniformity (manifest as a “welfare capitalism” [98] to give every man a chance at making a living) penetrated deeply into workers’ lives beyond the factory. It doubled as a mechanism for social engineering in the domestic sphere. The Fordist industrial betterment dictated where and how these workers should live as a manner of coercive “reward”: detached houses (requiring one to buy a Ford-branded car to commute to and from work); to be morally upstanding; etc. [Meyer, 116]. In turn, Fordism coalesced as an industrial trend toward a masculinized modernity. It moulded social orders in North America; rationalized geographies; vaunted nuclear families over other arrangements; standardized wage systems; and sanctioned dialects of gender considered socially “normative” for both men and women (to the detriment of first-wave feminism).

Whether Henry himself engineered Fordism or if it was, as Flink [50] described, a grassroots movement within the ranks, is beside the point. Rather, Fordism re-moulded masculinity with militaristic efficiency, championing the organization over the individual. To fit in with the organization would be a path for securing one’s “economic freedom” [114]. This regime of optimization agrees with Meyer’s description of industrial betterment.

Movreover, this uniformity behoved other companies to adopt Fordist processes if they wanted to stay competitive [Flink, 46]. As production cycles kept up with public consumption, the standardizing of masculinity cascaded into other secondary and even tertiary (i.e., “FIRE” — finance, insurance, real estate) economies. At the Ford factory, to hire men who were young, strong, and able to obediently withstand systematized, labour-intensive, mind-numbing manufacturing environments was an ingredient for success as an business enterprise. To have non-uniformity within the ranks — including an ageist tactic of discouraging older labourers from being hired — was feared to risk bottom lines and, respectively, corporate security. For a company boss, the Ford example was a mass-production exemplar. For the worker (invariably young, physically strong men), it was a penalty to appear as anything less than macho or virile. If a man lacked these, he was useless to the organization.

By recognizing how this filter fine-tuned the way masculinity was manifest, it is eariser to see how Edsel Ford and Harry Bennett — while both men within Ford’s upper echelons — articulated their dialects of gender so differently as to be different masculinities entirely. That is to say, if masculinity is a “dialect” of gender (a “language”), then these two men were “speaking” with two totally different “accents”. In a Fordist paradigm, only one of these accents was suitable for organizing factory culture.

That is, to juxtapose an effete scion and a burly thug meant that the younger Ford and Bennett were in every sense “different kinds” of men, respectively, in which an “acceptable” manhood was extremely limited by uniformity in this manufacturing culture [Norwood, 370]. Edsel’s relatively urbane life was anomalous to this rigid masculinity. Bennett, meanwhile, spoke this accent of masculinity natively. He made sure that subordinate workers were obedient to his masculinity — which was not only tough, but also highly hierarchical: every man had his place (and to challenge that place came at his own peril).

An older man and former boxer, Bennett was Ford’s alpha dog on the Rouge factory floor. His brute machismo negated whatever age penalty may have made him an expendable human resource. This probably contributed to the elder Ford’s eventual promotion of Bennett as head of the company’s Service Department (a union-busting, internal security division) and right-hand man [Norwood, 372].

Bennett was likely aware that his utility as a relatively older man in the Ford empire (and increasingly elsewhere) would have been of little use unless he could prove his unique value of being a factory bulldog. His obsequious loyalty to Henry, the capital-A Alpha dog, certainly helped. Bennett’s dialect of masculinity was intelligible to other men. He could intimidate his subordinates to keep in line and stay constantly productive along the assembly line — or defy the company at the real risk of physical harm from his thugs. This forceful conformity was something the elder Ford demanded of his workers, and it was also something his son, who as president was more the company’s symbolic leader, could not deliver.

From these gendered articulations, a modernist hierarchy within modes of production superseded nineteenth century precepts of authority — especially so as this masculinity intersected with social class. For example, Fordism neither venerated nor sought after skilled craftsmen [Flink, 117]. This new hierarchy, which prized neither knowledge nor training so much as a physical aptitude and servile obedience, restructured the pecking orders between men and in the ways they related to one another. No longer did master-apprentice relationships matter in a manufacturing economy obsessed with utmost efficiency.

This pecking order hinted at how working-class men were relating to women — or not, as was the case. A factory worker, aware of his socially subordinate, even menial role at the factory, could drive home to his new, single-detached home designed for a nuclear family. At home, with codes of masculinity internalized at work, he could domineer over his wife, children, and any other extended relatives living there. At home, he believed he was the alpha dog. This sense of entitlement could likewise be violent.

Growth of the nuclear family model, a beneficiary of the manufacturing age, coincided with a disruption in feminism. Before Fordism, first-wave feminism had emboldened (dominantly white) women to affirm themselves as citizens, pushing for legal suffrage, and being able to voluntarily leave the domestic sphere for any quotidian reason without the reliance of men.

Interestingly, the means to leave the domicile of her own accord was substantially facilitated by the emergence and popularity of the safety bicycle on streets lined with asphalt. Unlike horse-drawn carriages or early automobiles, safety bicycles did not require a dependence on a male chaperone [Furness 2005]. The safety bicycle gave industrial age women their first geographic independence. The safety bicycle was also the very same personal transportation technology which a young automotive industry had sought to squeeze into irrelevance. It did so by not only encouraging new motorists to use improvised, unpaved roads for horses, but also to commandeer newly asphalted streets (a paving technology designed for safety bicycles).

By the 1920s, automobile makers and motoring clubs had begun overtaking roads, at times quite aggressively. Meanwhile, as women were able to work beyond the home, older men in particular saw the autonomy of women as threatening to their own labour relevance — much as they felt resentfully toward the younger men whom they felt threatened their own tenuous job prospects [Wood, 107].

Small wonder, then, that as the first automotive unions fought violently Bennett and union-busting bosses, the core of these same labour organizations wanted women to return to the domestic sphere where they would not be a threat to the masculine workforce [107]. Oddly, the United Auto Workers, which advocated for experienced workers over low-skill workers, used women to promote its formalizing so to challenge Bennett and his Servicemen [Norwood, 373].

After World War II, this history may clarify why newly-returned GIs were so eager to return to work and to remove factory women back to the domestic sphere once again — given their collective memory of Fordist-style factory hiring standards and how difficult steady work was to find during the Great Depression [Wood, 99]. GIs would have regarded factory women as security threats to their own sense of job entitlement. Organization-trained GIs, of course, would later maintain the continuance of nuclear family tract housing — itself a rationalized product of efficient military bunker architecture.

As suburban subdivisions, where tract housing was being built, were sited away from urban centres where industrial activities prevailed, commuting to work required men to have a car and to press women into the “service” of maintaining homes and raising children while they were away at work. For a married couple living with a single car, as was often the case after 1945, women would have been confined to domesticity during working hours, with few men probably willing to car pool their wives to a second job. Men had learnt this regime well: Fordism; Henry’s strong-armed dominance over workers; and the rationalization of processes which served military efficiency for the world wars, continued on for decades and well beyond the Rouge factory gates [Flink, 114; Norwood, 372; Meyer, 96].

The Flink, Norwood, and Meyer articles agree that systematized experimentation over labour conditions co-existed with a systematization of the mass-production processes. The authors also agree that Ford’s experimentation with personnel control tactics, courtesy Bennett, would be outright illegal, even criminal today. Despite pioneering the so-called “Five Dollar Day”, it was clear that Henry’s main desire was his company’s continued dominance through social engineering. By leaning on Bennett’s terrific machismo, Ford rationalized methods of coercive manipulation the way one might manipulate a machine’s setting for improved performance.

But while Meyer addressed the “sociological department” in earnest, this departmental rationalizing merely foreshadowed how Bennett’s Service Department, per Norwood, asserted sanctioned dialects of masculinity within the Ford factories: through intimidation. This masculinist control over processes, later ascribed to post-WWII North American society, may also point to how men who failed to live up to a macho toughness would be subjected to harsher institutional treatment.

Furness, Zachary Mooradian. 2005. “Put the fun between your legs”: the politics and counterculture of the bicycle. Doctoral dissertation, University of Pittsburgh.