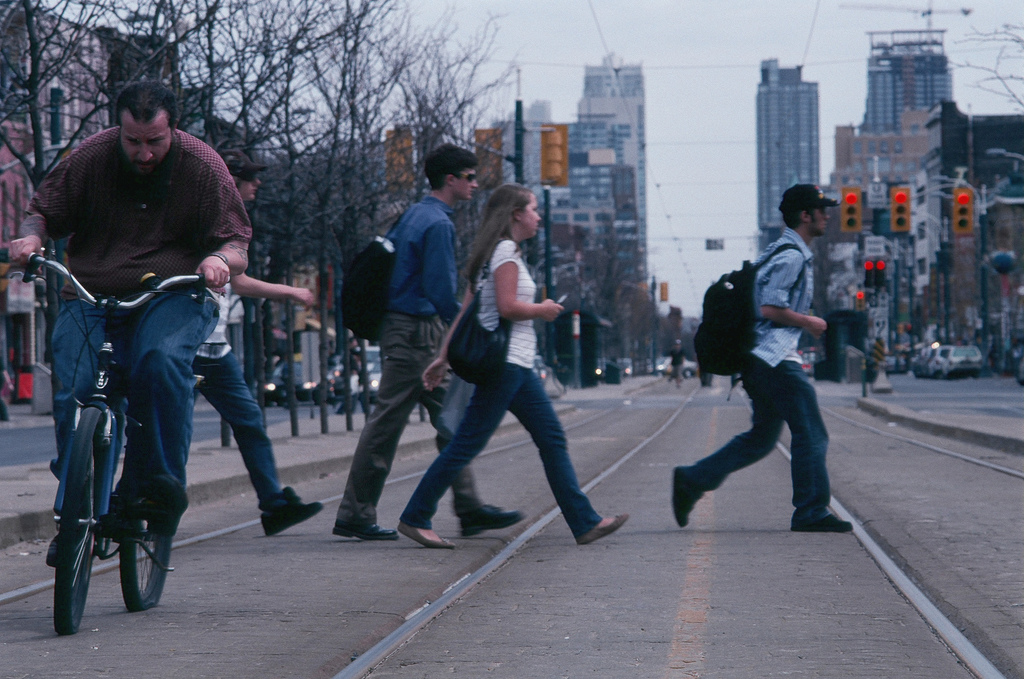 Bicyclist Kristen Courtney got lucky: she won the door prize. But it wasn’t welcomed: this “door prize” — a car door swinging open suddenly before her right-of-way — triggered an impact that threw her onto the streetcar tracks and into hospital. She recovered, but still endures chronic pain (Michalewicz, 2007, 1; Talinowski, 29 October 2007, A3). Why is this so lucky? Compared to citizens who crossed a street, waited at a bus stop, or bicycled with the flow of traffic — only to be struck and killed — she lived to tell about it. With such horror stories, it’s small wonder that some are fearful to leave their cars and commit to walking or biking. It’s simply too harrowing.

This is part of a transit puzzle which Toronto is trying to solve: the TTC aside, how might people be inspired to move about the city without using cars? Activists, councillors, and planners are slowly reaching a consensus that urban rights-of-way can be better geared for non-motorized mode choices which, beyond improving public spacing and getting more people outside, would also reduce air pollution and curtail sedentary health issues. As a nod to this commitment, Toronto recently hosted urban planners and advocates from around the world for the Walk21 conference, which addressed logistical and cultural barriers faced by car-reliant cities trying to improve foot traffic (Talinowski, 6 October 2007, ID3). It’s not that citizens are averse to wider sidewalks and biking arterials. It’s that after generations of relying on cars, they may need a little help to adjust.

Jim Walker, Walk21’s chair, used Copenhagen as a size and climate analogue to Toronto to illustrate how a walkable city could succeed here. By steadily reducing urban parking and setting up “car-free zones”, Walker explained how Copenhagen “transformed a community” where people are now using outdoor cafés year-round — even in winter when those cafés offer blankets to patrons (Talinowski, 2 October 2007, A7). While Walker found that Toronto’s underground PATH system provides a great place to walk, it comes at the expense of street-level vitality, adding that city centres are commonly beset with a different set of walkability barriers than suburbs (ibid.). Some obstacles that Toronto now faces include overriding prevailing notions of what qualifies as a viable mode choice; how public rights-of-way are planned and executed; how to alter existing infrastructure to foster walkability; and how to nourish heterogeneous activity at the street level.

Some resistance (and ostensibly, confusion) to pedestrian-oriented planning stems from the semantics of a “walkable” urban environment: far more than walking is implied, but is nevertheless overshadowed by its root meaning. By walkability, planners are actually referring to “human-powered” transportation mode choices — inclusive of bicyclists, wheelchair users, rollerbladers, and even children in prams (Gauvin, et al., 2005, 127).

Before World War II, Toronto was by necessity more compact as a function of transit: streetcar suburbs surrounded a central business district (CBD) — enabling citizens to live outside the CBD while being within walking distance of a local streetcar stop (Pacione, 2005, 265). In Toronto, this was certainly the case. Penfold (2004, 9) observes that as recently as the 1970s, “once-tree-lined suburban streets” where people had been walking to work, school, and the shops were eliminated as developers feverishly built car-oriented services (e.g., gas stations, fast-food restaurants, etc.) along major arterials, such as Eglinton Avenue. This transition accelerated in the 1950s as car usage escalated, and developers repurposed greenfields into low-density subdivisions, typically anchored by a planned shopping mall located next to major expressways (Pacione, 249). As citizens drove to indoor shopping centres, their foot traffic went with it — spawning a culture of “mall-walkers” and “mallrats” (ibid.). They were passing windows — not of homes and small cafés, but of retail displays and fast-food courts. Consequently, the collective memory of walking (or cycling) to reach most places faded into obscurity within a couple of generations.

Outside, urban sidewalks lost prominence as wider streets became a central focus of transit planning. To accommodate more cars, transportation planners worked to optimize arterials for “single-occupant vehicle[s], [and away] from car pooling, mass transit and walking” (Pisarski, 1992, 69). Meanwhile, newer, outer-ring suburbs sold a desired sense of place in contrast to the undesired notion of urban congestion (Bunting & Filion, 2006, 217). Sidewalks also lost their lure as new structures were designed to face inward (in some cases, to accommodate parking or courtyards), over, and away from public rights-of-way: as citizens used them less, the sidewalk earned a reputation, rightly or not, of being unsafe — something Jane Jacobs (1961) confronted by ascribing greater safety to increased sidewalk usage. To restore safety, Jacobs asserted that “eyes [must] be upon the street . . . [buildings] cannot turn their backs or blank sides on it and leave it blind.” (ibid.) In the wake of this scathing indictment against the abandonment of mixed-use development, Jacobs stressed the lifeline of the urban sidewalk and the diverse activity it sustains when developers encourage its use — rather than turning their backs on it.

Separately, linkages between public health and the downward trend of walkability are supported by research. One long-term study involving suburban citizens in Copenhagen found that cardiovascular disease and late-onset diabetes resulted from an increase in “sedentary leisure time activity” (Sjøl, et al., 2004, 222). In Canada, an estimated 40,000 deaths each year result from cardiovascular disease, but such risks are reducible through increased physical activity (Haley, 2000, 7). Supporting this, another study linked the value of “walkable green spaces” to increased longevity, improved health, and “higher functional status” of elderly citizens, concluding that one’s “availability of space for walking” increased one’s amount of activity (Takano, et al., 2002, 916).

Given the inevitable surge of seniors as baby boomers retire, this raises some concerns. As they reach a point when driving is no longer practical, the necessity to live near neighbours, civic centres, and commercial areas will become problematic. Many subdivisions around the GTA (where mass transit is sparse) weren’t designed with the foresight to factor this, so seniors risk being effectively imprisoned by their homes. “Mall-walking” might offset this slightly, but as an elective activity, seniors will still need to reach the mall — whereas walkability in a mixed-use context with close-proximity shopping becomes a direct function of independence for meeting daily needs. Seniors who can afford to migrate to the city core might push out lower-income citizens, raising both health and socio-economic implications for an already at-risk population that would have to rely more heavily on cars (Garasky, et al., 2006, 85). This displacement suggests a gentrification catered to wealthier seniors, while lower-income residents are forced to the semi-vacated outer core (Suarez, 1999, 10–11, 211).

Cars need not be eliminated for a walkable city to flourish: congestion zone charging allows for urban car traffic, but reserves its function based on a willingness to pay a premium (Glaister & Graham, 2006, 1399). Also, Maria Jacobs (2004, 25) explains how implementing traffic-calming measures (e.g., speed humps, raised crosswalks, bike lanes, etc.) should decrease “conflict(s) between cyclist and motorists.” This benefits overall safety as clearly demarcated boundaries can delineate those zones where motorists must defer to non-motorized traffic. Car-free zones — like Nicollet Mall in Minneapolis and with what Walk21’s Walker underscored in Copenhagen — also open access to walkability, fostering street-level interactivity that enriches the cityscape’s culture (Kudalis, 1998, 85; Talinowski, 2 October 2007, A7). Nevertheless, car-free zones aren’t always a remedy: Pedestrian Sundays at Kensington Market has come under fire as most vehicles are delivery drivers, not single-occupant vehicles, while the once-a-month event tends to draw tourists from well outside the neighbourhood, pushing out local residents and triggering fear that Yorkville-styled gentrification may soon follow (Glouberman, 2005, 128–129).

So while several options are at Toronto’s disposal, the challenge now falls on how to carefully deploy a strategy that won’t alienate the people who might benefit most from a walkable city. Walk21’s Daniel Egan doesn’t consider the transitional barrier political so much as cultural, noting that traditionally walkable cities in Europe were “built at a time when walking was the way you got around” (Talinowski, 2 October 2007, A7).