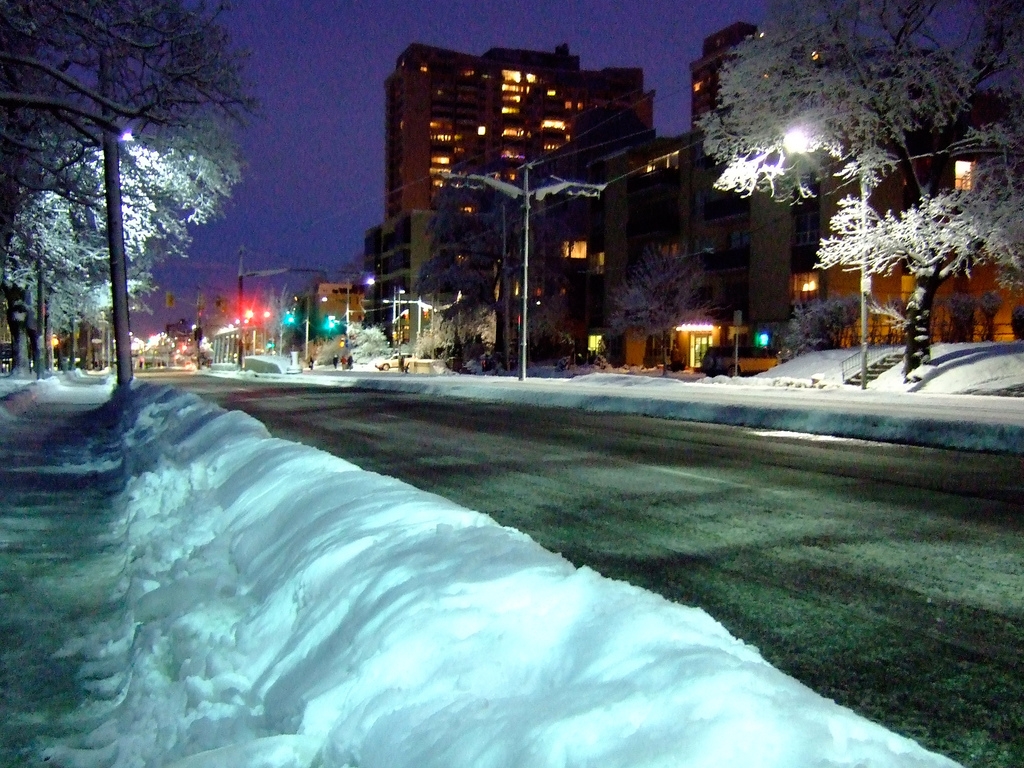 [Note: This is a rough-and-dirty commentary on my initial reaction to the Summit. I don't really go into a lot of detail about the ups and downs of the event, but I do want to convey my gut concerns as an urban designer, critical geographer, and my responsibility as a steward of nocturnal ecosystems.]

Earlier this week, I attended the Canadian Street Lighting Summit — an annual conference of lighting engineers, vendors, municipal directors, and consultants from across Canada and North America.

Overall, my experience was a good one — namely, as someone who is neither a part of “the industry” nor an engineer. For these reasons in particular, however, I was also acutely aware that a prevailing current — not quite an orthodoxy, but close — governs much of the discussion surrounding nocturnal illumination and policies thereto, and it left me with a less-than-joyous aftertaste. In other words, I’m about to get critical and passionate, so dismiss at will.

The Summit’s big theme this year was LED street lighting technologies coming ever closer to commercial feasibility as a replacement for conventional, bulb-type lighting. This is, several presenters demonstrated, a function of prices for LEDs becoming cheaper as they become brighter, more efficient, and resilient to the elements. Though not explicitly spoken, there is a way to describe this: Haitz’s Law. It is an analogue for LEDs the way that Moore’s Law is for faster computing power — in that within a given period of time, improvements can double and do so for much less than preceding generations.

Still, for street lighting fixtures, the capital (product) costs continue to be prohibitively high, at least for the near term, to be paid off by long-term operating costs: depending on the setup, it can still take seven or more years for an LED lighting system to pay for itself. Many municipal budgets, as was repeatedly stressed during both days of the conference, are more strapped for cash than at any time in recent memory. So even the prospect of making a complete lighting infrastructure investment for the long run is beyond reach, barring a few municipal exceptions.

That said, this is expected to change sometime during this decade, so that high-intensity discharge illumination (i.e., high-pressure sodium lighting, metal-halide lighting, etc.) will become a less-attractive option. The City of Los Angeles is now retrofitting its street lighting with LED fixtures by replacing luminaires one zone at a time — doing so with a very public campaign explaining how operating LEDs for all street lights will save about $7.5 million in hydro costs — or 68 terawatt-hours per year. The still-usable sodium and halide luminaires they are phasing out have been sold through second-hand auctions to other municipalities, creatively offsetting some of their capital costs in the short-term. What this doesn’t do, of course, is actually reduce the number of sodium lights in circulated use globally.

Also discussed at considerable length were new approaches to adaptive lighting technologies — that is, lighting which can be adjusted according to specific situations, traffic levels, and so on. Adaptive lighting, in which lights can be dimmed automatically or via a control centre, is already being used in pilot cases and can be applied to both HID and LED lighting.

This review could easily go into a total, uncritical recap of the conference, and there likely will be such reviews by others elsewhere. But in what appeared to be the only academic participant at the summit (if not the only academic participant outside the realm of engineering or business procurement), I left somewhat disappointed by the whole package. What I thought would be an engaging series of broad discourse and even debate on artificial lighting at night, ended up being disproportionately driven by an engineering-centric ethos.

While the engineering component is fundamental for leading a way towards standardizing lighting technologies and extensive quantitative analysis — the Illumination Engineering Society (IES) and International Commission on Illumination (CIE) are key bodies whose presence was felt throughout — it began to feel like these engineers were unable (or unwilling) to see the forest from within their familiar patch of trees.

What I mean is how well or how efficiently we illuminate our spaces of human movement must be evaluated holistically. This should happen by having all stakeholder parties participating as equal peers at the panel table — not just the engineers and consultants leading a dispassionate, quantitative discussion while parties existing outside these silos of knowledge, whose own knowledge might challenge such orthodoxy, are thusly reduced to asking feedback questions and advancing impromptu critiques which come across more like gadfly remarks than core points of concern to be heeded seriously.

This particularly came to mind whenever the International Dark-Sky Association Executive Director, Bob Parks, would step-up to the audience mic and raise points which challenged the prevailing rationale of particular lighting approaches. I also stepped up a couple of times with questions, although it felt evident fairly quickly that my placement as a grad student — and in a policy-heavy field such as urban design and planning — was out of sorts with their engineering-driven agenda and thus irrelevant to their concerns.

For instance, while street lighting standards under discussion in these talks advanced standardized minimum luminosities for safety — whether measured by luminance, spectral values, or adaptive dimming capabilities — no party came forth to question the root causes behind why these values were not being entertained to go much lower (i.e., less bright and consuming less hydro). Namely, these minimum brightness values, in the context of street lighting applications, were indexed to preserving existing velocities of motorized vehicles and operator ability to see “obstacles” like pedestrians, bicyclists, or animals whilst maintaining unchanged speeds.

While I do understand that the mandate of lighting engineers excludes transportation planning-engineering, per se, I do challenge any implication that they as a science-based caucus are absolved as a lobbying body from advocating for safer and less unsustainable solutions. This advocacy could come in the form of stressing the importance of slower street movements (such as traffic-calming through dimmer lighting) — commensurate to more human-driven modes of transportation (like bicycling and walking) — and through dramatically dimmer lighting approaches as tools to reduce the effects of both ecological photopollution and the biological chronodisruptions of animal species from said photopollution (from zooplankton to people).

I think I understand one reason why, and it goes back to something environmental ethicist Aldo Leopold explained in A Sand County Almanac: “One basic weakness in a conservation system based wholly on economic motives is most members of the land community [n.b., natural habitat] have no economic value.” Virtually every rationale discussed at the summit was centred on economic considerations, with little room for questions from ecological, social, or criminological disciplines steering the direction of future lighting approaches. I wonder whether this was the same oblivious, even cavalier manner that chemists and propulsion engineers held before it became clear that the chlorofluorocarbons used for aerosols and refrigeration were devouring a hole in the planetary ozone layer. Only once the detrimental effects could be monetized in quantifiable, measurable ways, did the timbre of how to replace CFCs with something less ecologically negative become the new way of framing subsequent research.

Before going into the panel seminars, I was aware of concepts like photopic vision (cone/colour/bright-light only), scotopic vision (rod/low-light only), and mesopic vision (combination of rod/cones in twilight conditions between the other two). How these were described and demonstrated, though, wouldn’t have really helped anyone who wasn’t already intimately familiar with the concepts. In other words, no one provided simulated demonstrations of how these types of vision varied. No one used a spectral chart to show where the human eye’s overall sensitivities were strongest. One speaker did show a graph of where human cone (colour) vision was most sensitive, but excluded where the human eye’s sensitivity for rod (rhodopsin) vision and ganglion cells for circadian regulation (melanopsin) fell into the picture. To the presenter’s credit, however, he did explain how rods are largely (though not completely) absent in one’s foveal (direct) vision and concentrated to one’s peripheral vision.

This is important because it explains why a driver’s night vision becomes more tunnel-like the higher their vehicle’s velocity: rods cannot deliver photon signals to the brain as quickly as cones can, so the periphery becomes a blur beyond a certain threshold. This is why many drivers do not see a deer (or bicyclist) at night until it is either too late or until their headlights, coupled with very bright street lighting, can project effectively onto the subject. Thus, as high vehicle speeds at night remain largely uncontested in an urban realm, where multi-modal transportation at all hours becomes the new normal, the most discussed remedy is to make things perceptually brighter.

To their credit, white-light LEDs, such as those being tested on Delaware Avenue and Hepbourne Street in Toronto (nearby Dovercourt and Bloor West), can be set to a dimmer overall candlepower (or luminosity) than orange-pink HPS lights, because the human eye is more sensitive to full-spectrum light and can make out more detail even as they are technically dimmer. In addition, LED fixtures can be aimed a lot more accurately than a discharge bulb with a simple reflector. Nevertheless, our eyes are sensitive enough to not warrant such bright lighting, but this would require a re-thinking on how slow a car driver will tolerate moving after dark. The obvious answer is to slow things down, but because it’s not the normative answer, this isn’t likely to be given much credence.

I’ll put together a more concise, coherent discussion about the summit’s specifics sometime in the coming weeks, but in short, my first impressions left me disappointed with the state of nocturnal illumination policy and widespread lack of consciousness to nocturnal ecosystems. If this summit was purportedly Canada’s best and the brightest under the same roof, I must wonder how I even had a place in the conversation given my chronic lack of engineering-fu (and lack of tight-knit connections within that network). For it to have left me wholly impressed, the breadth of speakers invited would have reflected a necessary interdisciplinarity which I felt was largely absent here. Such interdisciplinary discourse would successfully provoke engineers to think beyond their respective silos of expertise by seriously factoring softer variables which, at this time, are ill-able to directly impact someone’s fiscal bottom line. Because they cannot yet be quantified, such variables are largely treated as if they do not matter.

Until the public health impacts of photopollution can be dispassionately monetized, then this orthodox approach to lighting technologies is not liable to remedy the more systemic problem of humans and their eagerness to colonize the night for commercial ends — and doing so at the expense of others.