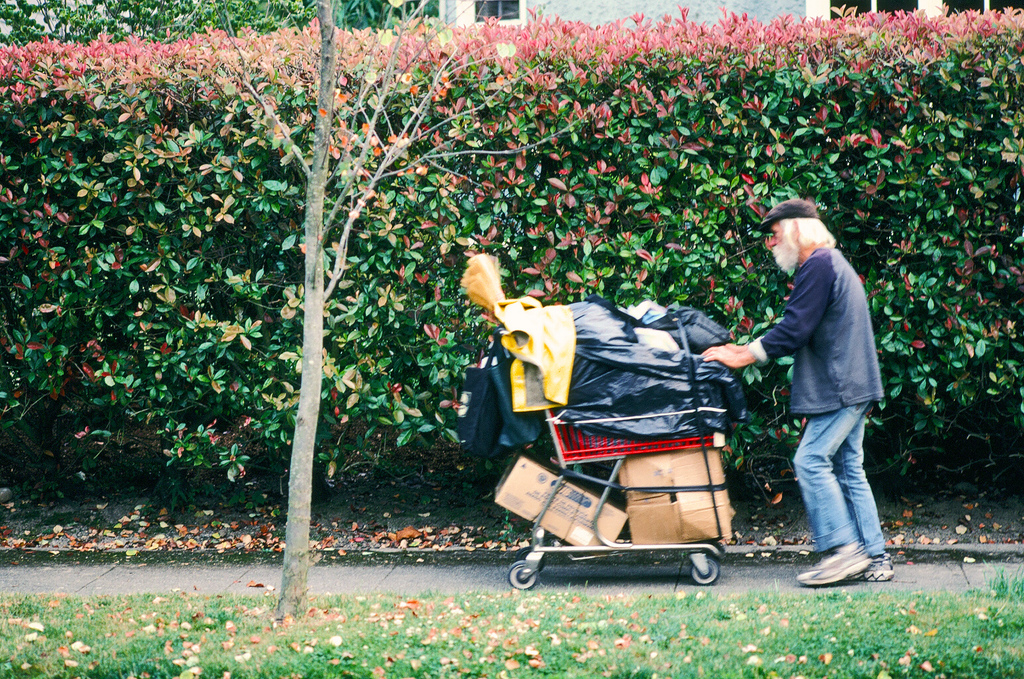 The opening speaker of the “Changing conduct: European ideas for car-free neighbourhoods” lecture, Dr.-Ing Ulrike Reutter, presented a framework for car-free neighbourhoods whereby the option — compulsory, in some contexts — of living without a car has been actively undertaken in ground-up development ventures. She presented this as the paradigm of deliberate “car-free living” — literally, living for all intents without owning a car.

Dr. Reutter, a civil engineer, discussed this notion of the car-free microcosm (namely, of the community- or master-planned housing development) by defining the demographics of whom in Germany has purchased those residential properties that were directly tied to contractural riders of prohibiting car ownership — with mobility requirements outright curtailing or excluding ownership of private motorized vehicles for household transportation. In descending order, the numbers overwhelmingly favoured retired people, followed by child-free households, and lastly households with children (which constituted a small, 4.5 percent share). The constraining reasons for forgoing car ownership, those who were polled indicated, included not only to significant costs associated with buying a car, but also the ancillary expenses associated with vehicle ownership (e.g., insurance, regular and emergency maintenance, depreciation costs, operating costs, and particularly the expense of finding a place to park the vehicle). Pragmatically, these reasons for living without cars was more a matter of practical economics than a lofty ecological consciousness.

To this end, Dr. Reutter presented a trio of housing models predicated on either the restricted presence or outright absence of private vehicle ownership. The de facto first category, areas which have generally left unchanged the way car ownership is regulated, was considered as a given. At this time, this is still a dominant model for neighbourhood development in Germany. But in the years since Reunification, developers and communities have begun exploring housing development and zoning regulations which either reduce the prevalence of car ownership (the “car-reduced” areas) or prohibit it nearly completely (“car-free” areas, whereby the only exceptions are granted on a case-by-case basis — usually concerning mobility-impaired residents).

Dr. Reutter noted how as of 2010, there are only sixteen “car-free” projects that are either in construction or have been completed nationally. She further underscored how these projects were driven by community-based, bottom-up initiatives, rather than centrally by a municipal planning agency. While the processes to achieve this zoning model are still relatively complicated (if not time consuming), it is at least now recognized as a valid legal option under German planning law.

Specifically, Dr. Reutter referred to the Gartensiedlung Weißenburg development in Münster as emblematic to why that city is considered the nation’s de facto, car-free capital. Not only is this development one of the sixteen experimental projects, but it is also sited on a former military lands (ostensibly a remediated brownfield, if not greyfield). The dwellings on this site are open only to home buyers who have done away with the car. The Gartensiedlung Weißenburg, however, does have integrated into its overall design limited parking provisions for car-share programmes and for short-stay visitors. Relatively little, however, was discussed on the pragmatics of this site’s consideration of mobility-impaired applicants (or pre-existing residents whose mobility impairment was introduced after their moving into the development).

While she argued that further regulatory frameworks are needed, three nagging questions pervaded this entire lecture (to be discussed in the next segment): how well are these proposed and implemented car-free/car-reduced residential developments integrated into mixed-use urban fabrics immediately beyond their boundaries? Second, how does this stratify socio-economic classes at the local level? And third, what provisions are there for these self-contained communities to be designed with mixed-use zoning from their design inception? For example, have there been projects in these “completed sixteen” which holistically integrated amenities such as a public library, school, clinic, municipal administration facility, or even low-order retailing from step one? Further, while Dr. Reutter’s presentation was concerned predominantly with those ad hoc rules which inform a ground-up, participatory governance and the mediation of non-car parking-storage provisions, the more practical, prosaic considerations were not discussed.

The recurring problem with these novel neighbourhood developments is that they loosely echo an established pattern of self-defined, self-contained suburban dwelling developments — in that a defined number of horizontal-level dwellings (versus high-rise condos, for instance) are planned in addition to the skeleton of pre-determined footpaths and bikeways (which may not necessarily integrate or blend in with antecedent, extrinsic morphologies). The result might, whether deleteriously (i.e., the way for which Regent Park 1.0 in Toronto was once notoriously known) or interpretively beneficial (i.e., any number of exurban subdivisions in North America), design itself in a way so as to pre-emptively exclude certain citizens of the city, certain socio-economic classes — thus segregate along eco-political lines who belongs and who does not. As to “public spacing,” per se, little was mentioned on whether any designated spaces inside the development would genuinely be accessible publicly for all citizens, irrespective of whether they lived in the development. This ambiguity further underscores a broader polemics on defining what “public space” really means in a post-industrial context (owing that some of the most-revered public spaces were reflexively founded during the height of industrialism and Fordism and long before neo-liberal privatization).

Nevertheless, Dr. Reutter admitted that current obstacles tend to downplay any likelihood that car-free or -reduced communities will become the norm anytime soon; at best, she declared them a “niche product.” Some of the factors othwarting greater popularity arise from the fear, uncertainty, and doubt that developer-investors will want to sign onto a model which has yet to prove itself as an acceptable investment risk; that perception that potential buyers might later change their mind and desire owning a private car (established, possibly, on the notion that heterosexual couples assemble families); and that the unknown costs going into brownfield remediation make proliferation of such projects relatively unattractive.

In maintaining a Germanic continuity to this lecture and review, architect Markus Heller was meant to complement the civil engineering and administrative pragmatics introduced by Dr. Reutter with a critical discussion on the problems facing architects of such planned communities. What Heller superficially instead focussed upon was the morphological and stylistic approaches thus far taken with completed, car-free developments across Western Europe. Heller cast his net beyond Germany’s bounds, but the sites still fall within linguistically Germanic areas of Continental Europe — which may or may not have semiotic relevancy in systems of order, meaning, and context (although I would like to suggest that there is a basis for this idea, albeit one worth exploring separately).

For his tour, Heller chose to profile residential dwelling developments in Amsterdam (Netherlands); Cologne-Nippes, Berlin, and Hamburg-Eppendorf (Germany), and Vienna-Florisdorf (Austria). He extolled the apparent advantages of communities with car-free living, including the premium for audibly (and possibly visually) quieter spaces; a pacing more aligned with the human-propelled speed of walking and bicycling; and a unique opportunity to improve vistas from balconies, stairways, and terraces. This slower pacing, he stressed, makes smaller details more visible to the traveller/flâneur/observer which would be missed in either an automobile cabin or on mass-transit.

On a more utopian matter, which raised my own critical scrutiny of his sunny presentation, he advanced that car-free communities, self-contained in their own right, enabled “public spaces” as “living rooms,” whereby adjacent dwellings could spill their social activity onto these pre-designed loci. In tandem to this perceived open sociability afforded by motorized, arterial-free pathways endemic to these developments, Heller also stressed that aesthetic and functional considerations for first-storey façades must be attended to with greater care. The result, as observed in his slide presentation, was duplicitously stark: much of it resembled a kind of glorified housing block prevalent to much of post-WWII Europe, while others looked like European interpretations on the Celebration, U.S.A., new urbanist theme (park).

In each of the case examples that Heller presented, these developments suggested a kind of socio-economic uniformity — thus effecting a de facto exclusion of any groups which might favour living without a car (whether driven by necessity or desire). This perception of economic, social, and even ethnic homogeneity further reinforced a sense of the utopian in these inceptive, car-free housing developments. While on paper these conceptual ideas look phenomenal to the architect, to the social demographer and to the urban geographer, they merely resemble an alternative approach to the post-war, self-contained, monocultural suburban housing developments known more for their anomie and social compartmentalizing.

During the question period following Heller’s presentation, I tried to broach this question by asking whether these developments were truly integrated with external, extant urban morphologies, and whether these projects genuinely produced a diversity which one might expect elsewhere in a major city. Needless to say, either the question was partially lost in translation or else Heller chose to gloss over the post-design, post-development realities of such mini-centralized neighbourhood developments. While they might work for a short time now, I have trouble seeing their current form enduring for generations to come.

What I saw in the slides of both presenters was a sense that unless residents of these car-free communities happened to be outdoors and at the ground level with other residents, it would still be just as difficult to form a sense of shared community when so many of the dwellings above the first storey lacked the walk-up porches and front portals considered to be a cornerstone for healthy social interaction at the localized level. If anything, the housing block approach suggested a continuation of division which was anything but conducive to community growth. There were no corner shops, no invitational linkages to citizens from outside these developments, and little sense to any diversification of use. In the last sense, this could be ascribed to the relative newness of the case study sites, but I take umbrage with this “one-use way or the highway” tack.

In retrospect, my take on these pioneering car-free development projects is that they still reek of a modernism of manufacturing place and mass-shaping space, rather than merely the zoning of an area of the city fabric to exclude motorized vehicle ownership (by virtue of no parking spaces within or adjacent to these zoned areas). Heller at least admitted that retroactively re-purposing neighbourhoods as car-free zones has generally not been successful. The hotch-potch evolution essential to diversified uses in a healthy community would thus foreclose on the idea that architects can drive mass-housing solutions — much to the architect’s chagrin — but it would foster a site-specific architectural development of dwellings which could better appeal to individual buyers. This would, in absence of stiff zoning regulations on exterior façades, create the multivariate uses that I would propose as a minimum criterion to the development and promotion of genuine, car-free urban spaces without the glossy, hollow overtones of a rarefied utopia.