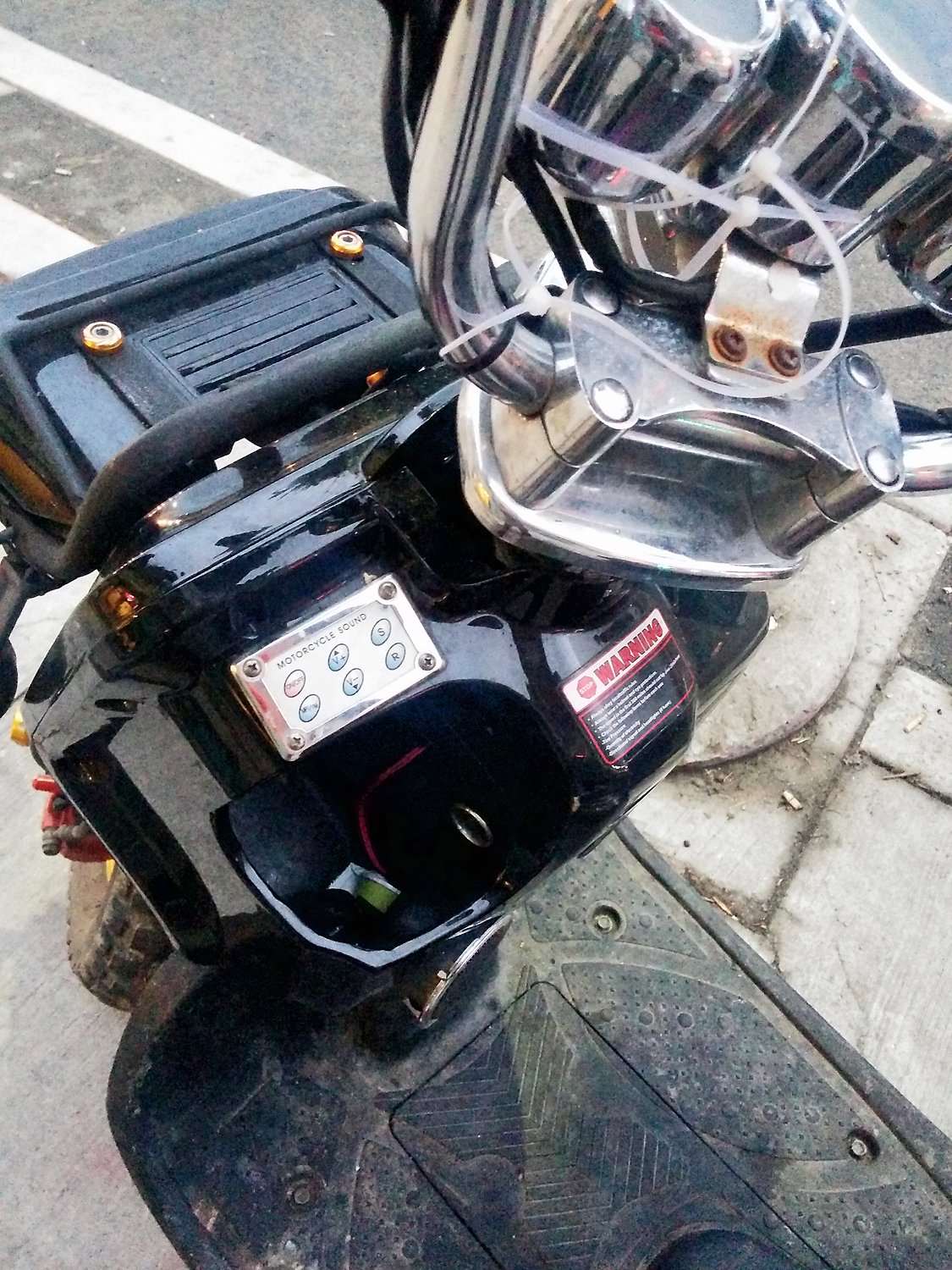 Thank you for yielding the floor today.

On this proposed amendment, the committee chair has chosen to sponsor a pretty dodgy request from John DeMarco.

DeMarco, speaking earlier, insists that quote-unquote “e-bikes” — which are propelled by motors — must be re-assigned as bicycles under section 886.1 of our Municipal Code.

I’m going rough on Mr. DeMarco. Have I any creds?

Well, I’ve a masters in urban planning from McGill. I’ve bicycled since ’77 and driven since ’89. I created the #RIDEOCCUPYSURVIVE buttons to raise money for Jenna Morrison’s now-motherless kid. For four years, I rode as a bike courier whilst earning my HBA in urban studies at the UofT. I’ve also taken on evidence-based research for multi-modal transportation planning. As a pedestrian, I’ve almost been run over by motorists using e-bikes on sidewalks.

With all due respect, Mr. DeMarco has chosen a lost cause.

The MTO prohibits anyone under 16 to mount an e-bike without a helmet, and those helmets must be certified for gas mopeds.

E-bikes can also reach velocities comparable to gas mopeds, yet can be abused on bicycle paths and sidewalks.

And e-bike companies know this. They’ve even had the foresight to equip their models with mounts for registration plates.

The MTO issues special plates for zero-emission e-cars like the Nissan Leaf. They could also require plates for e-bikes. But will they? That’s actually a really good question.

They do, however, issue plates for gas mopeds.

But unlike gas mopeds. the MTO has yet to require restricted “M”-class licenses to operate e-bikes, despite being electric mopeds.

The MTO also defines mopeds very specifically: it “is a motor-assisted bicycle fitted with pedals that can be operated at all times and has a maximum speed of 50 km/h.”

E-bikes are described here beautifully as mopeds. The MTO cares not whether a moped is propelled by hydrocarbons or electrons.

And if we’re going to disrupt our own definitions, then we really ought to propose the following in lieu of Mr. DeMarco’s illogical proposal:

First, an amended definition of:

BICYCLE — would read: “Includes a safety or recumbent bicycle, tricycle, or other similar vehicle, but does not include any vehicle or bicycle propelled or driven by any power other than muscular power.”

A new definition for:

MOPED — would read: “Includes any two-wheeled, motorized vehicle not otherwise designated as a motorcycle, including gas-powered mopeds, electric “e-bike” mopeds, LSMs, and bicycles modified with drivetrains propelled or driven by any power other than muscular power.”

And a new definition for:

MOTOR VEHICLE — would read: “Includes cars, trucks, motorcycles, mopeds, and any wheeled vehicle propelled by any means other than muscular power, and is not prohibited under the municipal definition for VEHICLE.”

Let’s also review Section 886.6, subsection C: “No person shall park, drive, or operate any vehicle, except a bicycle, on a bicycle path.”

That’s why we call them “bicycle paths and lanes”. Traffic engineers prepared them for safety bicycles — not for mopeds.

This isn’t hard, you guys.

And owing to this committee’s chair, our chief architect for obstructing multi-modal arterials for safety bicyclists, today’s proposal to will e-bikes into becoming safety bicycles, as sponsored by the chair, is dead-on-arrival.

So, lest we as a city are willing to entertain the definitions this deputation proposes, then we must not enable the re-invention of what safety bicycles actually are.

We’ve no basis to support Mr. De Marco to magically double-plus-g . . . excuse me, will an electric moped into a safety bicycle — what with their sealed headlight, brake light, turn signals, instrument cluster, windscreen, mass, and grip-operated throttle.

This proposed amendment — a scorched-earth effort against evidence-based, multi-modal arterial planning — must be . . . Well? Put out to pasture.

And frankly, I’m not amused by the revanchism steered by our current regime of governance, as embodied by this committee’s chair.

I’m simply here and speaking to the economics of mobility, safety, and wise engineering.

Accozzaglia ▸ Essays ▸ The City ▸ Deputation ▸ “E-bikes” are not bicycles
Article read time
About 2 minutes
Five-to-Midnight podcasts
Gatecrashing
You are not logged in.