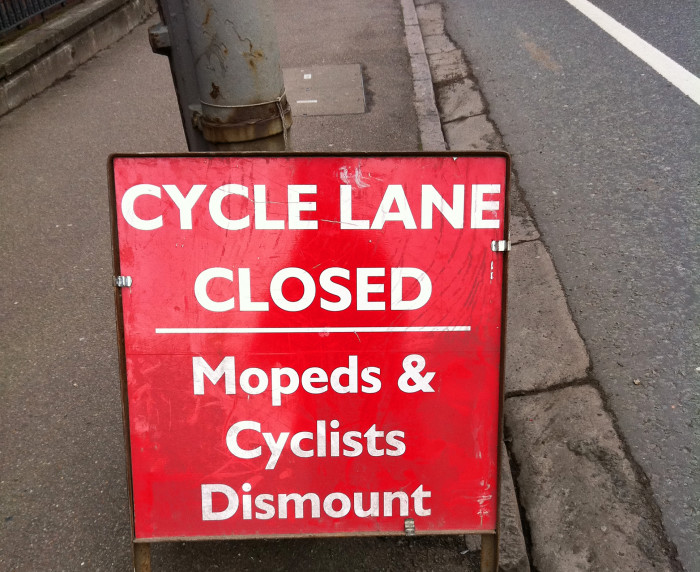 Editing notes: By expanded, this version of the transcript was the final revision before cutting it down a few more seconds to bring the deputation to just under the committee’s five-minute speaking cap. Research endnotes from the draft were converted to links. Applied references to standard units of mass measurement were drawn from this source, itself a political manoeuvre which, despite the brothers using weight as a civic cudgel to advance their political ends, unfortunately backfired. These standard units facilitate to remove abstraction from the raw numbers cited. —AI

Back in 2012, this committee directed Transportation Services to respond to a question — to define a bicycle. This was the wrong question to ask.

Now, fifteen months later, their answer is in.

Transportation Services have concluded that on designated bike lanes, an electrified motor scooter is a human-powered bicycle. Their report is openly hostile toward human-powered commuters and especially so to younger bicyclists.

If passed, unlicensed motorists can commandeer the very paths on which human-powered commuters are already besieged.

If we want to do right by item 28.2, then we must consider two questions:

Let’s take these in reverse.

In plain language, human-powered bicycles may use traffic lanes designated for bicycles. In a nutshell, that’s Municipal Code 886 — especially 886–8.

Motor vehicles, like electrified motor scooters, are prohibited from these lanes. This is a prudent, precautionary approach, and we must uphold it.

This recommendation undermines the spirit of 886-8, which acknowledges that our streets are already hostilely inclined against human-powered mobility.

This hostility is passed down from the last century, but we aren’t letting go of it. 886-8 responds to this stubbornness. It reserves rights-of-way for human-powered mobility wherever that infrastructure is available.

Usually, it isn’t, which is another issue this committee has been loath to deal with responsibly.

Matters worsen for kids should recommendation #2 also be carried. A lack of infrastructural accommodation for human-powered mobility is why sidewalks become the practical fallback for bicycling, especially for younger riders. This reflects a fundamental design problem we aren’t dealing with, one which cannot be resolved through punitive actions against human-powered mobility.

This brings us to perhaps our biggest fundamental problem: posted speed limits for every Toronto street are at least 10km/h too excessive.

Lowered speed limits, on their very own, obviate the need to cram electrified motor scooters into human-powered bicycle lanes.

When 40km/h becomes 30km/h, e-scooters capable of 32km/h can hold their own with other motor vehicles. On multi-lane streets where 50km/h becomes 40km/h, they can use the entire right lane as other vehicles pass in the left.

Lowered speed limits also yield fewer collisions. When collisions do occur, they’re less severe.[1][2] Will motorists obey these new limits? Perhaps slightly, but generally? Of course not. To assure that they begin to means we must completely re-design our corridors holistically.

And lowered speed limits are the keystone for creating holistic arterials.

So what’s a holistic arterial and why does it matter here?

Holistic arterial planning brings equity to mobility and activity. It prizes accessibility — particularly so for social accessibility. It weaves a stronger fabric for social commerce and for everyday urban interdependencies. A holistic arterial planning approach cannot proceed without using all four of these widgets and giving each of them a balanced stake in the matrix of an arterial or capillary design.

Holistic arterials and capillaries, however, cannot happen with our current speed limits, and they definitely won’t happen if we’re going to allow e-scooters to appropriate designated lanes for human-powered bicycles.

Fowl, not fish: if Vespas are chickens, then e-scooters are turkeys

Legally, e-scooters can weigh up to 265 pounds. Once a driver and occupant hop on, this can top 650 pounds — which, if using a standard unit, amounts to two Rob Fords.

Smaller e-scooters, with driver, weigh about 250 pounds — which amounts to one Doug Ford.

At 32km/h, that’s some serious forward inertia. An impact by either will do an order more harm than a human-powered bicycle and its bicyclist.

The economic importance of human-powered mobility

Item 28.2′s pigheadedness is also blind to new research which finds that consumers on bicycles spend more at street-side businesses than those who use motor vehicles. This data doesn’t come from bike-friendly Portland, but from car-friendly Fort Worth and Memphis. Similar new studies in Seattle and Toronto are in agreement.

Please don’t get me wrong: e-scooters rightfully belong on our streets. But to do this right, we must not lean on a policy direction which penalizes human-powered mobility. That’s what these staff recommendations advocate.

We must lower our speed limits.

We must plan our streets holistically to bring equity to mobility and social accessibility.

We must encourage our youth by giving them safer ways to ride.

Committee members, you would be wise to vote against recommendations 2 and 5 on Item 28.2, if not against this entire item.