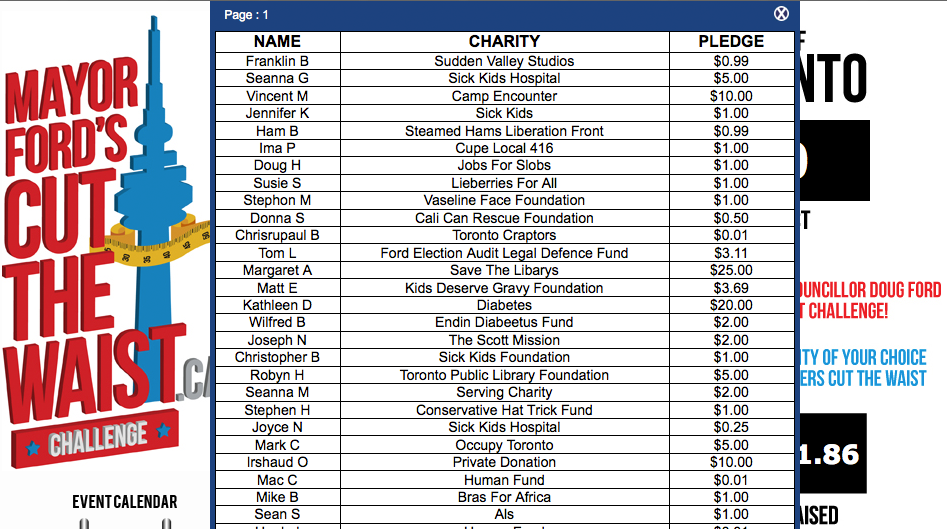 With the Brothers Ford spending most of their public servant time today on the problem of waist, something about it bothered me.

No, not waste — their waists.

It wasn’t their boastful weight loss vow which unsettled me. In a city which, largely of the Fords’ own making, is facing a monsoon of operational crises, it was the Brothers Ford’s tacky display of vanity — a picture of Mayor Ford posing next to a gargantuan weight scale — that was delivered in poorly planned taste.

Never mind that Toronto’s huge budget meeting — the one in which virtually everything is slated for a gutting — starts Tuesday.

And our city can’t proceed on a smart transit plan because Mammoliti’s Thumb Caucus is pathologically inept at generating revenue like a good business would.

What made the vainglory funny for Torontonians on Monday was the Fords’ hastily prepared Cutthewaist.ca site. It was intended to allow anyone to pledge amounts for each pound the Fords might lose as an incentive to help them reach their goal (it appears that no city agency, bureau, or commission was involved in its creation).

For Rob and Doug to make this vow beforehand is like hearing your housemate vow to take out the green bin next week (when you can’t forget that they haven’t done any other chore in over three months).

The site admin removed most of these spurious pledges, but by then Cutthewaist.ca had become a loud, clanging spectacle of a distraction from Ford’s inept management of our city — at least for a day.

While press statements from the Mayor’s office tend to mysteriously leak out on Friday afternoons (a lesson straight from the Karl Rove School of “Hey You, SUCKERS!”), this dog-and-pony show rolled out on a Monday morning. Monday morning is when the mayor could be delivering well-deliberated solutions that were finalized over the weekend (I write this anyway, well aware of how pointless it is to say).

What’s really bothersome is their vulgar display of vanity: however we decide to modify our bodies really is a personal, private affair. With perhaps one good exception allowed for public servants like Mayor Ford and Councillor Ford, announcing physical changes to one’s body ought to stay confined to friends, partner, and family.

That one exception? Let other people passively notice those physical changes on their own — well after the changes are underway. This was what happened when Mayor David Miller quietly lost 50 pounds while in office. By carrying himself as a visibly trimmer mayor with nary a word about it, Miller could inspire by example in ways that Ford-and-Ford’s boastful pledge vow cannot: Miller brought home the bacon.

This could have been a wonderful way for Mayor Ford to generate some badly needed good PR. He could have tied his target weight goal with a public health campaign to encourage Torontonians to get in shape.

It’s almost too easy to needle Rob and Doug on how riding a bike could do this quite effectively. Might a bike shop offer loaning heavy-duty cruisers for the Fords in exchange for their promise that both will use their slick loaner rides at least once a week in public? By riding a bike, their target weights could be met in little time. The downside, at least where the Fords are concerned? This might actually encourage more Torontonians to ride bikes. Oh no.

Then-Mayor John Street of Philadelphia, hoping to shake the city’s infamous reputation of Fattest City in America in 1999, saw opportunity in ignominy and formed Philadelphia’s Office of Health and Fitness. Within a few years, Philly’s ranking went from “fattest” to “fittest”. This would not be so difficult to duplicate in Toronto with a resource we sort of already have: Toronto Public Health. Ford wouldn’t need to spill any rich gravy to make this happen.

Which leads me to wonder: does Ford even know what civic tools he inherited with his mayoral kit?

As private citizens, Rob and Doug are welcome to boast their promise to diet. But as public servants, they’re wasting our time as citizens when their PR blitz derails the whole day. Also, expect council sessions and committee meetings to get a whole lot more hypoglycemic and cranky over the coming months (if you thought Nunziata was snappish already . . .)

Rob and Doug may as well be holding a photo op about getting a nose job, hair plugs, or having their teeth professionally whitened.

For someone who struggles with their weight, there’s nothing funny about vowing to lose pounds to avoid heart disease or stroke risk. It’s a personal decision and an even more personal commitment. Set a good example after the fact — not before. Curiously, this approach could also apply to good governance — an approach for which our city is now being starved.

As with past mayors, Torontonian citizens want this government to make Toronto a better place to be — knowing full well that this is a wish made in futility. Instead, the gravy train campaign is being derailed by the guts of Rob and Doug.

These are definitely not the kind of guts we need to wisely run the nation’s biggest city.

About Astrid Idlewild: Astrid (@accozzaglia) is an urban design candidate from the School of Urban Planning at McGill University (2012). She completed her HBA in Canadian and urban studies at the University of Toronto in 2009. She is a film photographer, #RIDEOCCUPYSURVIVE button fundraiser for Jenna Morrison, former bike courier, the brains behind the DenizenTO TTC subway shirts, and researcher for the Kodachrome Toronto Registry.