I am happy to report that the Kodachrome Toronto project is still alive and plugging ahead.

For each of you who have generously offered information about collections of film which could have Kodachrome slides or movies, you have not been forgotten! I have a queued list of folks who are interested to have their collections added to the Kodachrome Toronto registry. For now, that registry is about as exciting as an Excel spreadsheet (probably because it is an Excel spreadsheet). Eventually, the archives platform chosen for CCLAIR will help bring this spreadsheet to the next level.

The KT project has from the start been closely interwoven with CCLAIR — the Canadian Cultural Landscape & Architecture Image Repository — which has been commanding more of my attention lately. In short, CCLAIR is a multi-institutional effort, with support from the NiCHE (Network in Canadian History & Environment), to ultimately receive, inventory, and digitize image media content from retired and deceased Canadian scholars to help facilitate future research.

To this end, CCLAIR requires a platform for its database of archive records. It also needs a system by which media goes from being uncovered from a dusty storage box to being searchable and viewable digitally. This is a bit more complicated than it sounds.

The latter, while technically easier, is far more laborious and costly as it requires developing a very hands-on workflow involving huge amounts of human hours. The former requires assessing existing archive management software platforms. Some (like Gencat) have ancient roots stuck way back in DOS, whereas others (like Dspace) are open-source projects with an awareness of modern software conventions.

With exception, much of the image content scholars have generated throughout their careers is either locked away on film slides and negatives, or on analogue videocassettes. Because of their probable locations — in a department storage room, an office, or in a home — the condition of this media could be better than average, but there might also be disasters. For the most part, my focus has been principally interested in finding ways to recover, preserve, digitize, and store film data — namely because of its implications for the KT project.

Doing this draws together skills that are more suited to the library information sciences, archives management, and computer science — none of which are in my area of training.

So what I’ve been doing is working on fairly tedious, fairly dry tasks like poring through technical data sheets for software, reading information architecture theory, trying (futilely) to set up standalone PostgreSQL database servers, and testing film scanning equipment to determine the smartest way to go about building a system whereby every participating institution will be able archive locally but still maintain standards for a Canada-wide CCLAIR platform.

Flatbed scanners that double as scanners for film (you can tell because the lid will also have its own glass-encased light source and it might also have film-mounting plates) are still inferior to dedicated film-only scanners, despite impressive advances over the last decade or so. Fine details are softer and even lost. This is a side by side comparison of the same image — one with a flatbed scanner (and heavily sharpened digitally afterwards), the other with a film-dedicated scanner (and only sharpened during the scan itself). Both models are currently sold: 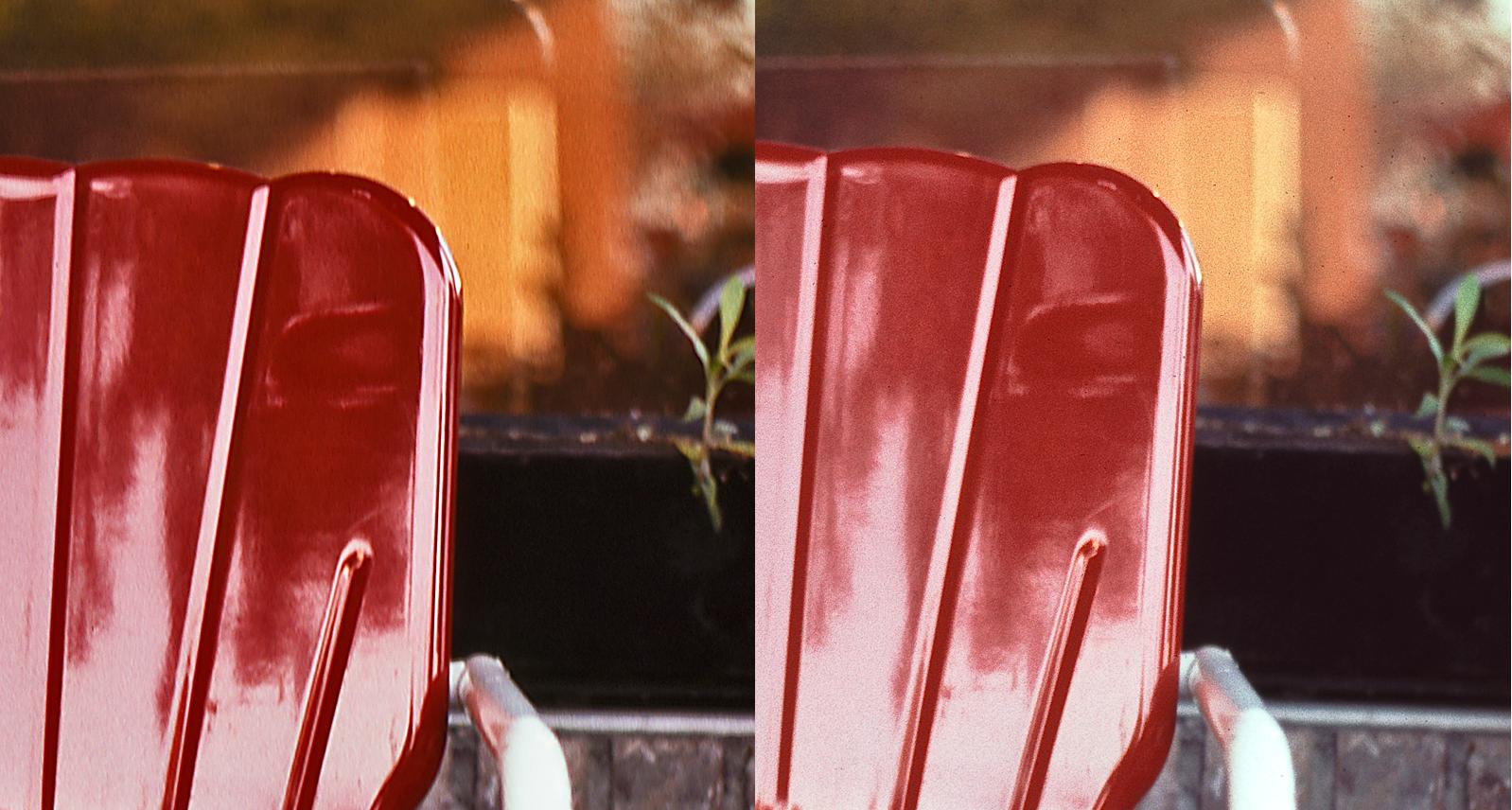 In this past, mostly-digital decade, a few well known, film-dedicated scanners are no longer being made. Some of these (guess which) go for criminal amounts of money on the second-hand market. How bad? How about for twice the original new price from ten years ago (with ten year-old technology)? Worse, if one breaks, there are few support options.

The good news is that there are still relatively affordable (and new) film scanners still being manufactured that’ll do leaps and bounds better than virtually all of the best flatbed scanners and even some of the older film-dedicated models. These dedicated scanners are a step below the highest-end: the drum scanners. Just because they’re neat to see in action, I’ll explain drum scanning.

Drum scanners are a bit like watching a cylinder record player crossed with light: a glass cylinder “drum” is illuminated from the inside. Film is “oiled” (with something clear) and taped to the cylinder. Then the drum spins very quickly as a light stylus moves slowly along a track in one direction (like a needle) and scans a small area of film. What is basically a long, narrow strip of a scanned image (captured with each rotation) is pieced together by the software into a single image. They’re a pain to operate and they require a lot of technical fastidiousness (a trained technician, patience, a dust-free room — the makings of an OCD paradise). The basic technology is ancient, but the basic principles are still the same. This model is from the early 1990s:

The quality of film-dedicated scanners, however, are good enough for archival work to be done, some of which are small and portable enough to travel with — perfect when the liabilities and expense of transporting a collection to a scanning lab are simply too great.

They do have a downside: anything bigger than 35mm film won’t fit into any but the most expensive film-dedicated models, and those are too big to easily move around. I expect there will be q few instances where film was shot in larger roll formats like 120, 220, 828, and 620 — and, of course, sheet film such as 4″x5″ and up. So dealing with those films will require a special solution, as will movie film canisters. But for now, the focus is on the most common format of 35mm or 126 film since that’s what was very commonly used for about the last 75 years.

There isn’t much more to add except to stay tuned. Well actually, there is a lot more, but if this post made you numb with boredom, it gets even more technical. In the meantime, I hope to have resolved some issues with the scanning equipment I’ve been testing most recently and hope to have a flawlessly working unit in place soon to help facilitate documenting the workflow CCLAIR (and KT) will use for archiving photos.