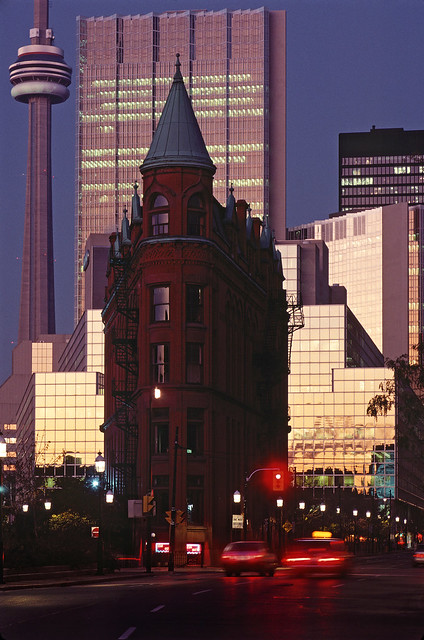 This view, from sometime during summer 1984, no longer exists.

A TD Centre and Bay-Wellington tower complex had yet to materialize.  Instead, a largely unobstructed view of the Royal Bank Plaza reflected dawn light behind the Gooderham and Worts flatiron building.  The shorter glass edifice between the two is largely the same now (and was used as a scene prop for the 1986 David Cronenberg film, The Fly).  This is one of my favourite three moments in the city captured in Kodachrome.  It looks like it could have been shot this morning.  Almost.

When I first saw this, the first reaction I had was of astonishment at what was missing.  In 2009, on Simcoe Day at dawn, I wanted to recreate a “25 years later” moment.  The shots might have turned out poorly or fantastically.  It no longer matters, as the next day, whilst visiting Montréal, my camera bag with the half-dozen rolls of Kodachrome (half of those already shot) was stolen and never recovered.  So hopefully there will be another chance to re-create this scene in a contemporary sense.  What’s most important is to get the lighting and time of year exactly right, along with the limited amount of traffic.  This limits options to Sundays and Simcoe Day.

Because of recent (to me) news in other circles, I utterly hope that a favourite prof of mine, now very infirm, can recover to shoot at least one or two rolls of Kodachrome this year.  I regard him at my “Kodachrome prof” as his lectures used Carousel rings of Kodachrome slides of Toronto architecture now severely changed or completely gone.  His course, a social, political, economic, and morphological journey of Toronto’s history, was without question one of the most important experiences of my undergrad work at the UofT.

Get better, Prof. Gad.  You’ve got some frames to shoot.