Part 6 of 6 in
Mnemotechny in Toronto. 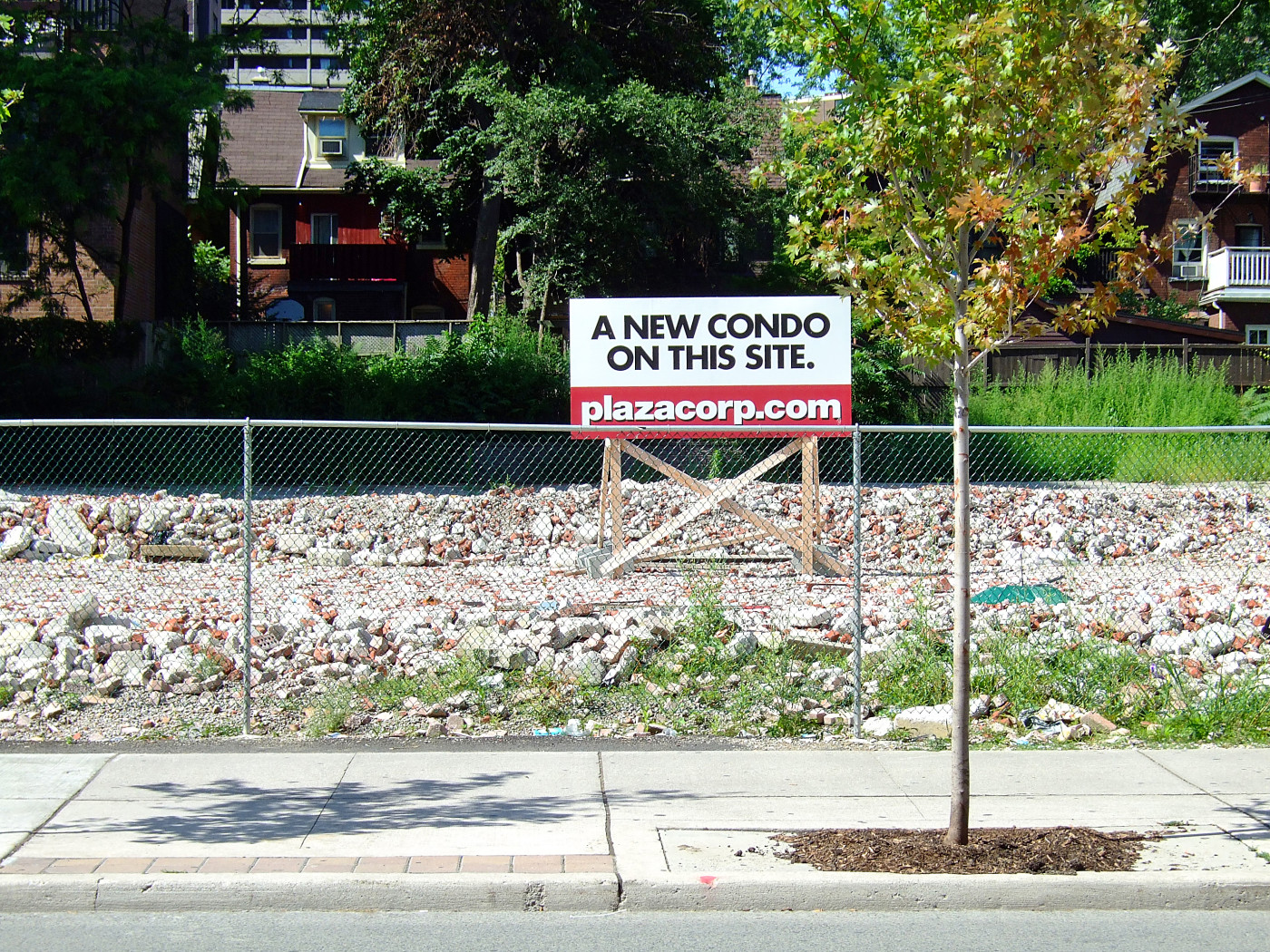 Figure 10. Pending condo development at 50 Wellesley Street East, August 2008, with visible remnants of a just-demolished, four-storey brick office building. As of 2012 2015, this development is not yet built. Branded both as “Plaza” and “50 Wellesley East”, its developers still have a positive opportunity to inscribe the “Plaza” (or “Plaza at 50 Wellesley”) name permanently to the tower and to enhance legibility of the streetscape along Wellesley. Owing to its extended presence for at least four seven years, the “Plaza” name serves already as an effective, if ephemeral, toponym. [Idlewild]

This is the conclusion of a six-part series, posted from June 6th to 11th, on the relationships between temporary condo names and their impact on public space wayfinding and legibility. Catch up with the entire series.

It is challenging to confront the problematics of ephemeral condo toponymies for a few reasons.

First, the case for permanent toponymies is unlikely to register with developers[5]. That is: the inscription of permanent names is probably not something to have crossed their minds before. Their principal concern is to produce space and to profit efficiently from an increased exchange value of real estate before divesting their stake in that locality. This modus operandi produces new problems for a commons which should facilitate a sense of place and belonging for citizens who navigate the streetscape for their sundry activities. Making the streetscape more illegible works against this. Second, navigating the deeply contested politics of neoliberalism, anti-regulation, and its direct impact on urban geographies (particularly in global cities) is a touchy one, with repeated chasms of disagreement between practitioners and citizen-stakeholders. Unsurprisingly, those with the biggest toys — i.e., capital — tend to have an upper hand. Practitioners wield the capital instruments to, within reason, will whatever project into existence as they see fits their ends.

As grim as this may seem to the participatory citizen, this is not necessarily a fait accompli. The buying habits of real estate consumers change with respect to generational and macroeconomic currents. Demands by those consumers can in part shape how future development proceeds. Meanwhile, facilitating a civic criticism in Toronto to challenge under-regulated condo development or BIA overreach could cultivate a mature, more organized stand by participatory citizens who are invested to challenge a doctrine of market-based policy development, sold to the public as wholly benign, even benevolent. That said, this citizen-based counterbalance must stay aware, particularly following Toronto’s 2010 municipal election, that the best tool of agency for engaging private development is at the regulatory level; through the active presence of citizen groups at committee and council meetings (where zoning variances begin their public negotiation); through the election of capable, vetted advocates at city council and provincial legislature; and through steady community organizing.

The most salient challenge, however, is when masculine developers maintain how they are best disposed to know how to connect with feminine buyers when producing new real estate space. Given gendered schisms between seller and buyer, problems emerge when developments generate hostile conditions for citizens who are women — where empowering women to cultivate a sense of place and belonging with their surroundings is discouraged when developers and other private consortiums transform urban streetscapes into a progressively inscrutable commons. This strike against a healthy mnemotechny is antithetical to realizing the vibrant, utopian Torontos rendered lavishly in the branding of condo toponymies surrounding construction sites. Those fictive Torontos evaporate once condo doors open and marketing toponymies get removed, leaving behind a dystopian cinder of how a city could and should be. An illegible commons thwarts one from engaging with her city or embracing it with a zeal of familiarity befitting of a vibrant home city.

[5] On 12 August 2011, from a conversation with a highly involved real estate broker in Toronto’s condo market (named “Robin” to protect their identity), this question was presented. Robin’s response, paraphrased, was they doubted developers engaged wilfully in ephemeral condo toponymies for liability reasons (n.b., the original hypothesis before beginning this research). Rather, it’s that developers probably had never contemplated this problematic before.