Part 1 of 6 in
Mnemotechny in Toronto. 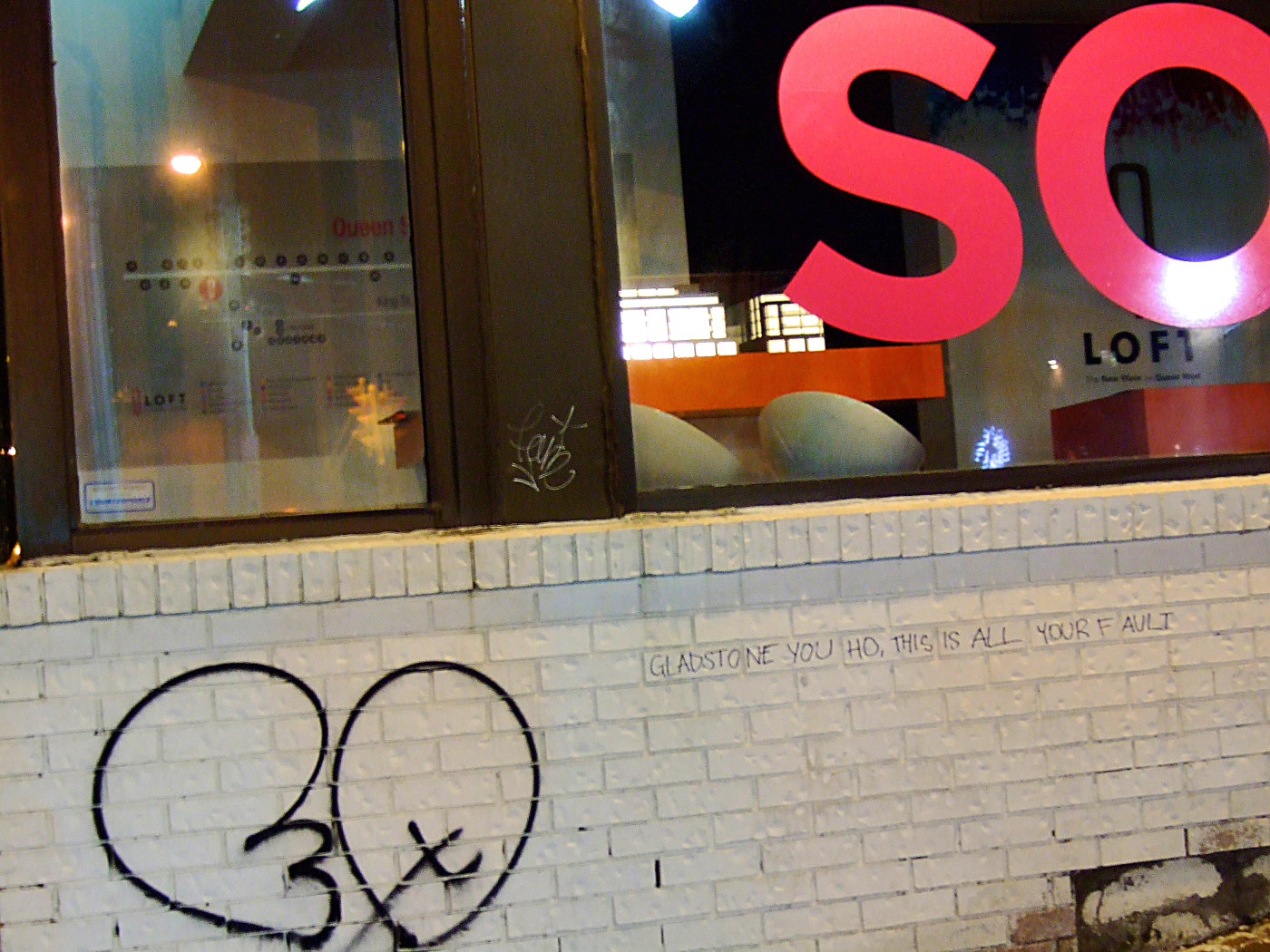 This opens a six-part series, posted from June 6th to 11th, on the relationships between temporary condo names and their impact on public space wayfinding and legibility.

As the ongoing condo boom in Toronto gained momentum during the 1990s, scores of mid-rises and glass towers began replacing edifices from the city’s fading past of industry and manufacturing. These condos — some substantial, others narrow infill — started to mould streetscape morphologies into completely new terrains, outwardly and vertically so. Older buildings, both the unassuming and the distinguished, got replaced. Some demolished buildings were more memorable than others. Some were remembered for the tenant which occupied much of their existence. Some were memorable for period architectures. Some were utterly forgettable. Elsewhere, new developments capitalized on remediated brownfields, generating a tabula rasa of urban spacing where none existed previously.

Others, however, were known by names inscribed on their façades. These buildings were indexical for reading the textuality of the city. They could serve as useful wayfinding landmarks. While there was never an assurance for their permanence — the city is a kaleidoscope — they still could serve as aides-memoire to anchor a sense of place. As a by-product of Toronto’s re-urbanization after decades of postwar greenfield development at the region’s periphery, many structures were torn down to help invigorate the economic viability of districts whose health was once reliant on a manufacturing-based secondary economy, since driven out by tertiary and quaternary economies. This revitalization, facilitated by careful planning strategies (Dill and Bedford 2002), reshaped Toronto’s urban body from a producer of goods to a centre of service-based consumption.

What this has also done is denude the urban terrain into someplace more alien. As one style of development — built form as investment vehicle, tenant occupancy its byproduct — expands concurrently in other global cities, Toronto, as seen from street level, may be mistaken as an anyplace. One way to avert this, to anchor a sense of place in memory, is to endue new-build condos with some kind of fixed identity, a mnemonic marker of sorts — whether it is a visible name on the exterior or a unique architectural treatment to elevate an unmistakably novel presence.

What happens instead is new-build condos undergo an interim phase during which an address is christened with a building name. This name, temporary in purpose, is disposed of once the building opens for occupancy. Absent unique architecture, the glass-walled, box-shaped condo towers end up echoing one another. How does this method of urban re-development, one by-product of the gentrification process, deprive from what Kevin Lynch (1960) describes as a legibility? How does poor legibility shape the social timbre of the built environment and integrated streetscape? How does poor legibility inform public spacing? Does this illegibility gender the city in unintended ways? Might a case be made to favour a permanent approach for inscribing legibility to the re-urbanized city?

This six-part series is an appeal and polemic to challenge Toronto’s ephemeral condo toponymies — the high-profile, short-term emergence and subsequent removal of condominium edifice names. How is streetscape legibility compromised when proposed condos, branded conspicuously by high-profile names, get built and then are stripped of their names once construction is complete? While seemingly innocuous, this contemporary practice of streetscape erasure deprives the public — that is, anyone who engages the city as a medium (Kittler 1996) for conducting everyday tasks — the semantic shorthand to discern, describe, or situate their surroundings. It disrupts the mnemotechny[1] for visualizing a sense of place within Toronto. This not only makes it more difficult to navigate the city, but it also makes problematic the conveyances for giving meaningful directions to anyone who finds themselves lost inside this inscrutable, new-build environment. Such conveyances depend on a collective civic conversation to incubate a local identity and legibility. That identity becomes a reflexive response to a “global disorder and uncontrollable, fast-paced change” (Castells 2009, 568).

The inability to describe newly built environments can be vexing, since the desire to describe material spaces is an inherently social function; the imperative for naming places and the desire to create legible spaces, meanwhile, seems to complement one another (Crinson and Tyrer 2005, 58). Those unnamed spaces become one signifier for a global entropy which detracts from a local sense of place. Even seasoned Torontonians may experience disorientation when emerging from the subway and into a neighbourhood where rapid development has moulded the streetscape into someplace perceptibly alien. Without markers or devices to describe those changes, including permanently inscribed names, the streetscape becomes a hostile place. A city in which one feels lost, even momentarily, becomes an anxious city imprinted by an optics of danger (Lynch 1960, 4).

Part two examines how the eradication of place names erodes the social memory of the streetscape and why this erasure occurs.

[1] Mnemotechny is defined, literally, as “the art of aiding and improving memory” — an idea proposed during the Industrial Revolution. An early use of mnemotechny appears in page 5 of Miles, Pliny. 1850. Mnemotechny, or art of memory, theoretical and practical, a mnemotechnic dictionary. London: E. Churton.